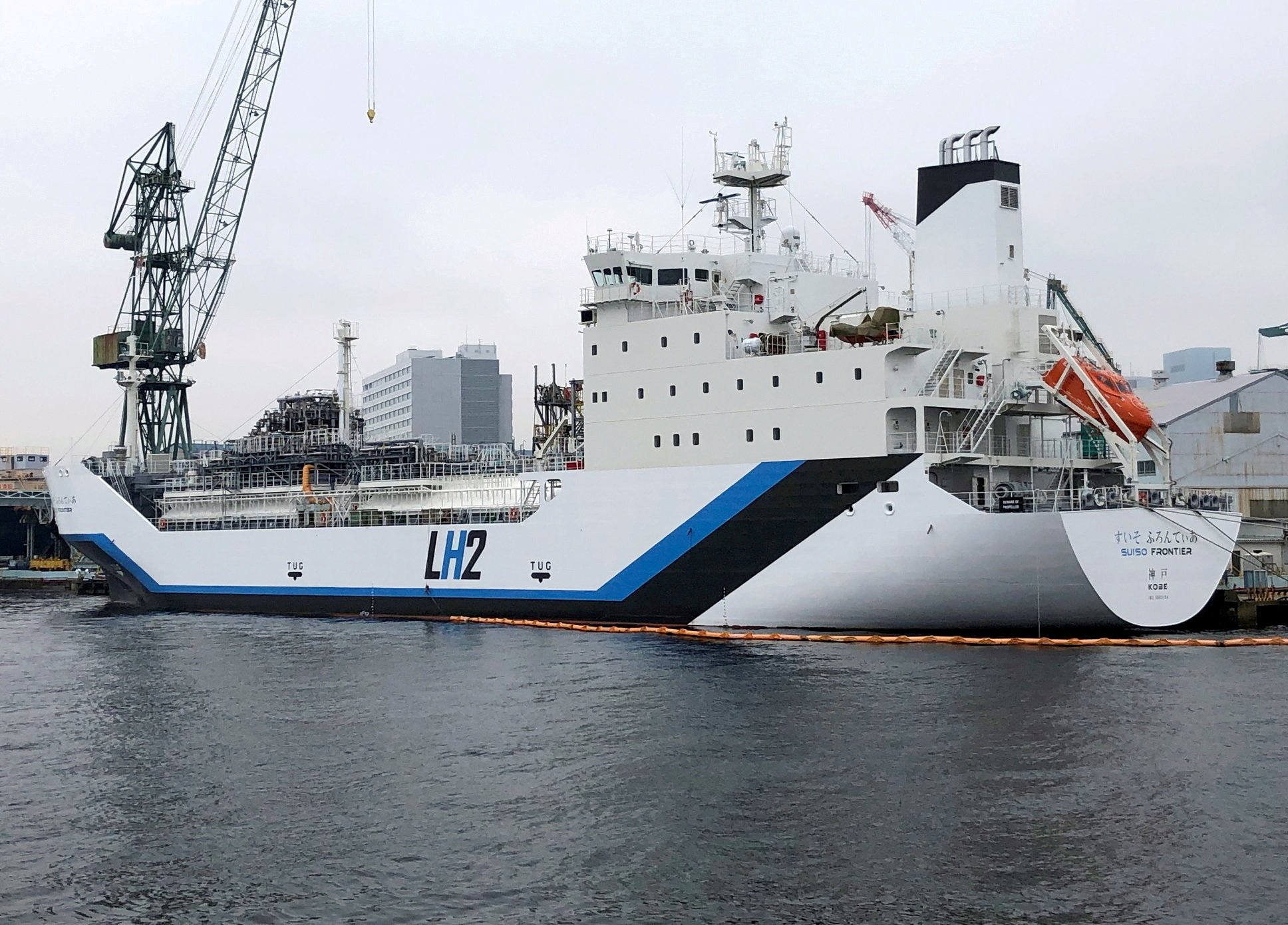 Liquefied hydrogen carrier Suiso Frontier in Japan. PHOTO: GETTY IMAGES
The idea of building "the world’s biggest green hydrogen plant" in the South has been welcomed by most. But making the new wonder fuel so far from potential markets creates a shipload of challenges. Mark Price reports.

All you need to make hydrogen in your kitchen is a 9-volt battery, water and a couple of paper clips.

So why are electricity generators Meridian Energy and Contact Energy not considering a hydrogen plant for New Zealand’s main potential market, Auckland, which has all the necessary ingredients and more?

There are several reasons, but the main one seems to be that the New Zealand market for hydrogen will be too small for too long.

Contact general manager strategy James Flannery told the Otago Daily Times the companies had looked at a range of possible locations before settling on "the lower South Island".

"Demand for hydrogen in Auckland and elsewhere in the North Island will take a long time to develop and this demand will be quite small relative to the volumes of hydrogen that can be produced in the lower South Island.

"As such, it is likely that the vast majority of the hydrogen produced in the lower South Island will be exported."

It is investigating the use of renewable energy at Tiwai Point, in Southland, to produce green hydrogen at scale, once the supply agreement with New Zealand Aluminium Smelters finishes at the end of 2024.

A market review as part of that project has concluded major international demand for green hydrogen is imminent.

If it goes ahead - and that is a big if - it can only mean a new trade for a port like Bluff.

But, as of this moment, there is a major snag.

The world has only one small ship capable of carrying bulk liquefied hydrogen.

And, it is still being tested.

The Suiso Frontier, built by Japan’s Kawasaki Heavy Industries, is due to make its maiden voyage, carrying hydrogen from Australia to Japan, in the next few months.

Its designers had to overcome a major issue unique to transporting hydrogen. Liquid hydrogen must be supercooled to cryogenic temperatures for shipping.

In May this year, Reuters reported transporting hydrogen was the biggest technological challenge for merchant shipping in decades.

"The major challenge is to keep the hydrogen chilled at -253degC - only 20degC above absolute zero, the coldest possible temperature — so it stays in liquid form, while avoiding the risk that parts of a vessel could crack."

The Manapouri Power Station which produces power for the aluminium smelter at Tiwai Point and may power a hydrogen plant in the South.PHOTO: LAURA SMITH
Kawasaki vice-executive officer Motohiko Nishimura, told Reuters the next phase of the project, already running, was to build a commercial-scale hydrogen carrier, fuelled by hydrogen, by the mid-2020s, with an aim to going commercial in 2030.

Korea Shipbuilding and Offshore Engineering is designing a tanker too; working with a steelmaker to develop high-strength steel and new welding technology, along with enhanced insulation, to contain the hydrogen and mitigate risks of pipes or tanks cracking.

A Norwegian shipping company is planning a "roll-on/roll-off" hydrogen carrier, and a Canadian company is developing a ship to transport compressed hydrogen gas, rather than liquefied gas, which does not need to be cooled to cryogenic temperatures.

Shipping is not the only concern for the electricity generators.

While New Zealand "green hydrogen" will have the environmental advantage of being made from a renewable source - hydro-electricity - the process is two or three times more expensive than making "blue hydrogen", which is made from fossil fuel such as natural gas.

The International Renewable Energy Agency is a champion of "green" hydrogen saying it is "essential" if aviation, international shipping and heavy industry are to reduce carbon emissions.

Helpfully for the two New Zealand electricity generators, the agency pointed out in a report earlier this year electricity accounts for much of the production cost.

It speculates it will be 10 years before green hydrogen is competitive with other fuels.

How well the proposal for the South stacks up will be the substance of Meridian and Contact’s "technical feasibility study" due to be completed by the end of the year. Mr Flannery said it will not be made public.

The two companies have also called for "registrations of interest" [ROI] from possible partners, and Mr Flannery said the process had confirmed "the significant global interest in using electricity in the lower South Island for hydrogen production".

"Our view is that hydrogen is the best form of new demand as it has the potential to create jobs, grow GDP and decarbonise New Zealand."

The ROIs are due to close at the end of this week.

A decision on whether the outcome will be made public has yet to be made.

There will be interest in whether giant Australian mining company Fortescue wants to join with Contact and Meridian or continue to pursue its own plans for a Southland hydrogen plant.

Radio New Zealand has reported Fortescue telling the Government production could begin as early as 2023.

But how Fortescue would get the hydrogen to overseas markets by that date is unclear, given Japan seems to be leading the way with shipping technology and is signalling it will not have a commercial vessel available until 2030.

Basic chemistry; 3H+N=NH3
The best way to transport hydrogen is to turn it into ammonia.
It has three times the density of hydrogen, can be easily be liquified and transported.
Shipping companies already transport it around the world.
They are also trialling it as a fuel for their ships either by combustion or fuel cell.
So why the negative article about green hydrogen from Tiwai???

It makes far more sense to transport hydrogen as ammonia, which liquefies at -33 degrees C or at 10 bar at ambient temperature, and contains 1.7 times the hydrogen per cubic meter than liquefied hydrogen.

The ingredients for ammonia can be green hydrogen (from water and green electricity) and atmospheric nitrogen. At the consumer end, ammonia can be used to generate electricity with fuel cells similar to those of hydrogen or burned in an I.C.E..

Toyota plans to use ammonia as a carrier of hydrogen for fuel cell applications. Also involved is the company Sawafuji with a high-purity ammonia-to-hydrogen conversion system.

Australia’s CSIR has been involved with a high-purity ammonia-to-hydrogen conversion system that has been designed for use at hydrogen-fueling stations.

MAN Energy Solutions, Samsung, Equinor, Wartsila, and other companies are working toward the production of ship engines fueled by ammonia.

These are just a few examples. There is an increasing amount of r&d in this field going on around the world.

The fertiliser industry has experience in handling ammonia for a hundred years. Now it can be put to another use: reducing our reliance on fossil fuels.

Where there is a will there is a way. Unfortunately NZ media doesn't seem to have the will to be clean & green and tend to only report the negatives, not what is actually happening in the world regarding hydrogen deveiopments.