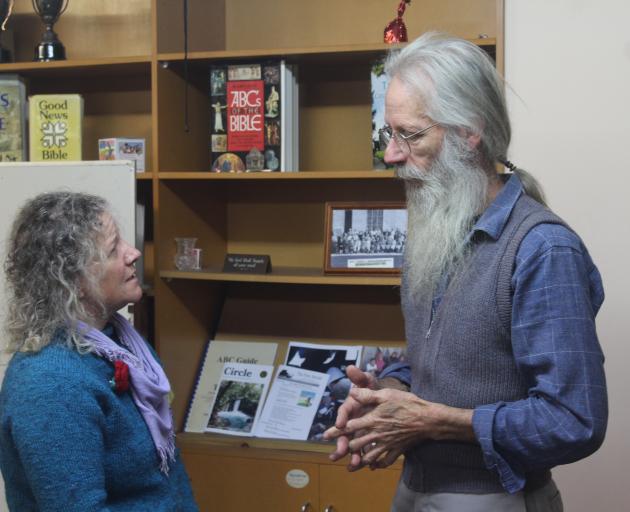 Greenpeace Aotearoa’s lead agricultural campaigner Christine Rose co-organised a conversation group over the weekend, attended by Environment Southland councillor Robert Guyton among other environmentally concerned locals, to discuss the future of farming in Southland. PHOTO: BEN TOMSETT
The future of Southland farming was the central theme of a community conversation facilitated by Greenpeace Aotearoa and local environmentalists on Saturday.

A group of about 15 people from an array of backgrounds, including councillors, campaigners, students, and residents from across the region, gathered in Invercargill to exchange ideas and discuss potential improvements to Southland farms to mitigate environmental impacts.

Jennie Campbell and Dave Kennedy co-organised the event to kick-start the discussion.

"There’s this general recognition that, in particular, synthetic nitrogen fertiliser is leading to elevated nitrate levels in our freshwater — our rivers, our aquifers, and also leading to climate change. That’s leading to waters that are no longer safe to swim in, water that’s unsafe to drink.

"Industrial agriculture as a whole creates 50% of the country’s greenhouse gas emissions, and also this dependence on intensive dairying in particular is leading to reduced resilience in food sovereignty. We are producing less food crops in Southland than we did in the past."

Environment Southland Councillor Robert Guyton was one of those present, and said that he would be speaking to the council in an upcoming meeting regarding the contents of the conversation.

One of the ideas he brought to the table was the development of paddock gardens, which utilise farming techniques to create a mixed production of food crops for the community, while also improving soil quality.

Environmentalist Matt Coffey promoted the idea of planting Carex secta in and around wetlands to improve the water quality.

"I think it’s clear that all the stakeholders in Southland are on a journey," said Ms Rose.

"There’s a lot of opportunity I suppose to foster that change — working in partnership where possible with the farming sector in a way that it improves local food production and resilience and self-sufficiency, but obviously there are broader structural forces and a lot of inertia in the system that makes change difficult."