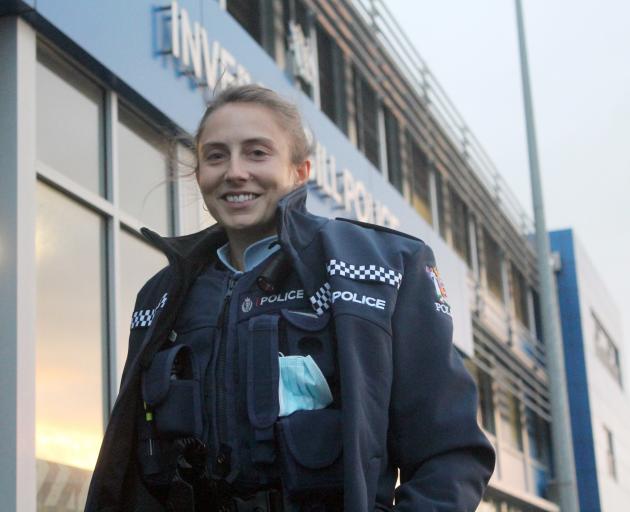 New police recruit for the southern region Constable Jessica Hinchliff is excited about the challenges ahead. PHOTO: LUISA GIRAO
Invercargill's new policewoman hopes she can help her colleagues to make the region safer for the community.

Not only was Constable Jessica Hinchliff among the group of 71 recruits who graduated last month at the Royal New Zealand Police College, but she also claimed the Second in Wing Prize, or the Patron’s Prize, at the ceremony.

The 27-year-old confessed she was surprised, but she was honoured by such an important achievement.

"I was sort of surprised because all the recruits there put in a whole lot of effort.

"What is really cool in the Police College is that everyone comes from a different background and has different skill sets — so there is a lot of talent over there. I was quite surprised that I did that well."

Const Hinchliff, who grew up in Christchurch, has been deployed to work at the Invercargill Central Police Station.

She said she became interested in joining the police force a couple of years ago when living in Southland.

Working in the farming industry, she had never thought about becoming a policewoman until she met some officers and understood the importance of their job.

"After talking to them, I felt it was a quite interesting field to get into and I always sort liked the idea of helping people.

"I just felt I was ready after having a bit of life experience behind me. I don’t think I would be ready if I had joined the field earlier."

Const Hinchliff said she had wanted to be deployed to the deep South as she had been living in the region with her partner for several years.

"We just really enjoy living here. There are things to do, nice scenery and lovely people.

"I feel pretty privileged as so far they seem to be a great team to work with."

She wanted to explore all the departments of the police until she found one she wanted to focus on.

However, when asked what she wanted to achieve in the southern region, she did not hesitate.

"I want a safer community, really. I think that is the end goal for the police, so everyone can feel safe, and I hope I can help to do that."