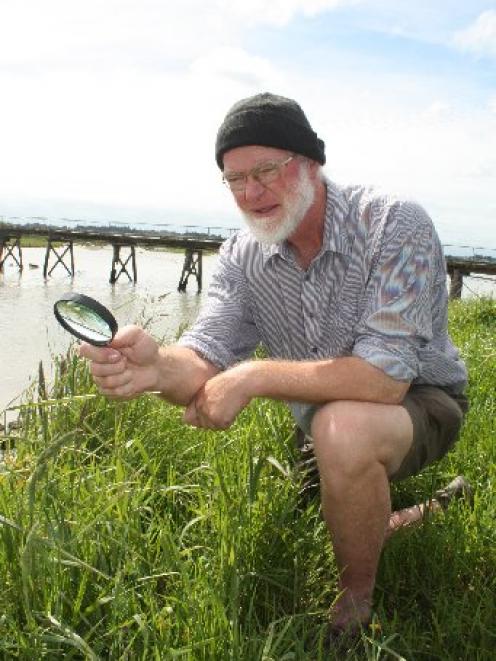 Lloyd Esler.
Lloyd Esler describes himself as a ''cold hard sceptic'', but even he is starting to believe otters might have made themselves at home in Southland.

Over the past decade, the Invercargill natural history teacher and author has spoken to 11 people who have seen something small, speedy and otter-like in southern waterways.

Ten of the sightings were within a 25km radius of Otautau, in western Southland.

The sightings occurred between 1929 and 2011 and all were ''remarkably similar'', Mr Esler said.

''They all described an animal about 2ft [60cm long], of which half that length was tail. It had legs, a flattish face and swam. There is nothing that fits that description apart from an otter.''

Officially, bats are New Zealand's only native land mammals. Mr Esler wants to know what the mysterious creatures are.

''As far as I know, no-one has photographed an otter. No bones or fossils exist. But either this is a native otter which has so far eluded us, it is an otter-like introduced animal, or everyone who thinks they have seen one has made a mistake.

''The lack of evidence troubles me, but so many sightings interest me.''

There have been sporadic reports of otter-like creatures in many parts of the South Island over more than 200 years, but no sightings in the North Island.

Captain James Cook wrote about seeing an unusual four-footed animal on a Dusky Sound, Fiordland, beach in 1773 - the same area where a paua fisherman Mr Esler interviewed said he saw an animal he believed was an otter swim under his glass-bottomed boat in 1954.

Betty Hawk told Mr Esler she saw a creature poke its head out of the water at the Clifden Bridge, near Tuatapere.

The ''cream-coloured, whiskery animal was about 12 inches [30cm] long and needed a shave'', she said.

Mr Esler has found many newspaper reports about sightings, including an article about Mr E. A. Tapper, of Invercargill, who told of three encounters with otter-like creatures in the Waihopai River and Waikiwi Stream in the early 1920s.

One clipping tells of a woman cooking an otter killed and brought inside by the family cat.

Over the years, the creature has been given a Maori name - waitoreke.

Others think the animals are not otters at all, but perhaps possums which have taken to swimming, quolls or bandicoots (small marsupials native to Australia and Papua New Guinea) which have somehow found their way to New Zealand, baby seals, ferrets, stoats or water rats.

Mr Esler said he was keen to hear from anyone who had seen an unidentified swimming animal or, better still, anyone who could show him where one was living.

''I would absolutely love to see one, and photograph it.''

He hoped to include a chapter on the mystery creatures in his book on southern whalers and sealers to be published next year.