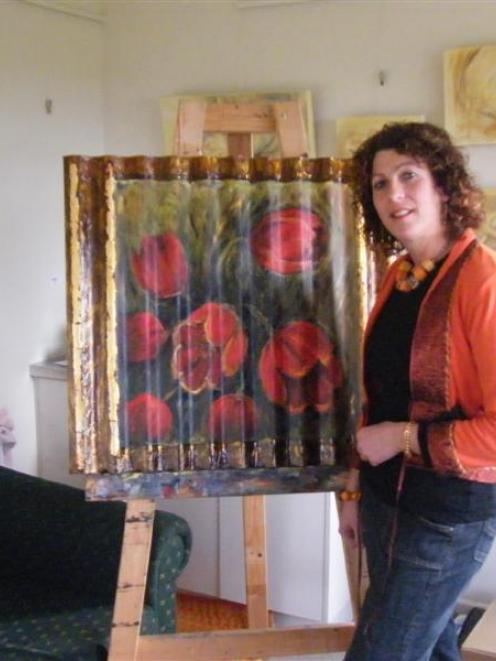 She has the perfect setting to create her work - a studio on her farm just north of Riversdale, where she sells and exhibits her art.

‘‘People get their endorphins from exercise. I get that from painting,'' she said.

Mrs O'Connor's paintings in last year's Riversdale arts exhibition were well-received and she will exhibit old and new pieces in this year's exhibition.

‘‘I'm trying to have all new work out here [at the studio] when the exhibition is on but still having the tried and true that people like,'' Mrs O'Connor said.

People will have the opportunity to visit her studio, which will be open the same hours as the exhibition, including late nights.

Mrs O'Connor is known for her work on corrugated iron surfaces - she won a Queenstown Art Society award for a corrugated iron nude in 2008.
But she also works with different media, colours and textures.

She had a solo exhibition last year at Southland Museum and Art Gallery in Invercargill.

She likes to paint living things and describes her style as figurative, consisting mainly of portraiture and impressionism.

Sometimes she would paint from photographs but found it better to paint from real life so her artwork looked three-dimensional, she said.

‘‘Art is about how light plays on things,'' she said.

Mrs O'Connor has been painting for six years, after taking a three-year extramural course through the Learning Connexion in Wellington.

‘‘It's like running a marathon - you can't do it on your first try but you want to,'' she said.

‘‘There's things I see now that I wouldn't have seen a year ago because I've matured as an artist''.

She always tries to explore in her work and is now incorporating acrylic inks and colour into black and white.

Lately she has been working on a series of black and white children's portraits.

The underlying principle of her latest work is ‘‘less is more''.

‘‘I'm creating a painting, not a photo or illustration. It doesn't have to all be there. You have to leave something for people to interpret and inspire something in the person looking at it,'' Mrs O'Connor said.

‘‘I don't want to churn out paintings. I'm an intuitive painter and don't always know what I have when I finish,'' she said.

During summer she gets together with artist Mags Meechang and US artist Shirley Cleary.

Mrs O'Connor said being an artist could be isolating at times but it was really helpful and inspirational to have friends give her constructive advice about her work.

Now that her oldest child was 17 she was able to put more time into her art and her goal was to see a lot of progress in her work, she said.

‘‘I think I've perhaps created my style and I think my work should be more easily recognised now.

Your brush strokes are your signature''.

‘‘When I tutor I try to teach people to see things differently,'' she said.

She is working towards the Invercargill Licensing Trust art awards in July. - The Riversdale Arts Mixed Media Exhibition will be on display at the Riversdale Community Centre from July 18 to 26. Visits to Christine O'Connor's studio can be arranged by phoning (03) 202-5357.