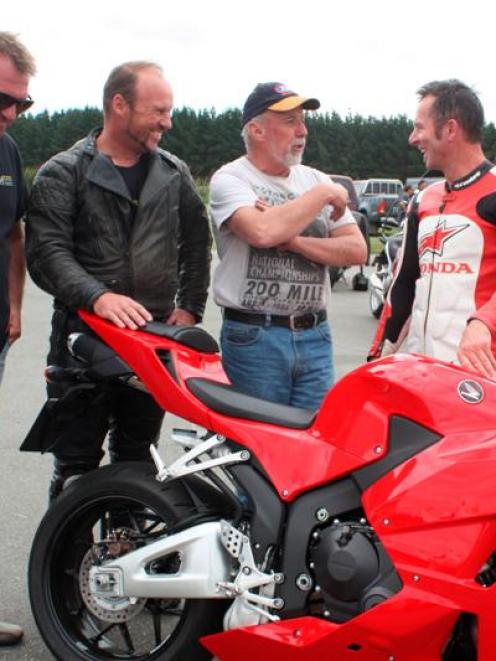 Former World Superbike Championship runner-up Aaron Slight (right) talks to Burt Munro Challenge competitors (from left) Alan Chaloner, of Perth, Australia, Lincoln Teale, of Marlborough, and Tim Mulligan, of Invercargill, at a pre-challenge training day at Invercargill's Teretonga Park Raceway yesterday. Photo by Allison Rudd.
Motorcyclists in Invercargill for the Burt Munro Challenge were able to train with one of the best yesterday.

The tutor was Aaron Slight, of Masterton, twice a World Superbike Championship runner-up, who amassed 13 wins and 87 podium finishes during his title-chasing career. He took 37 riders through their paces, assisting with basics such as braking and cornering before they were let loose on the Teretonga Park track.

The Southland Honda-sponsored training day was a precursor to the annual Burt Munro Challenge which begins today and most of the riders were seeking track time before their events.

Now in its eighth year, the challenge is named for legendary Invercargill speed rider the late Burt Munro. It was organised to promote Southland and motorcycling after the success of the 2005 movie The World's Fastest Indian, which starred Anthony Hopkins and told the story of Munro's successes at home and at the famed Bonneville Salt Flats in Utah, United States.

More than 1500 riders and supporters have flocked to the city for this year's challenge, most of them from other parts of New Zealand, as well as a few from overseas. Race entries have topped 530 - up 130 on last year.

Racing begins today with the Bluff Hill hillclimb, with racing on Oreti Beach tomorrow evening, track and speedway events on Saturday and the Wyndham street races on Sunday.

There are 10 Australian competitors this year, eight more than last year. One of them is Alan Chaloner, from Perth.

The former Southlander said he was persuaded by his Invercargill-based brother Syd to buy a hard-surface racing bike and compete in the 2011 event. He enjoyed it so much he had come back each year since.

''When Syd told me about the events - the hillclimb, the beach races and the street races - I thought 'that sounds a bit out of control'. But it's a great event. It's a good environment.''