Otatara community members are asking the Invercargill City Council to revisit its plans for the use of a $90,000 bequest from a resident.

A group of about a dozen people yesterday delivered a petition opposing the use of the funds for projects in Fosbender Park to Mayor Sir Tim Shadbolt.

The petitioners carried signs with questions including ‘‘Why did the council fail to consult anyone else before making their decision?’’ and ‘‘What does it take for people to get listened to by this council?’’.

Otatara resident Derek Gostelow died last year and left $90,000 to the Invercargill City Council on the condition the money be spent on community projects within the Otatara area. 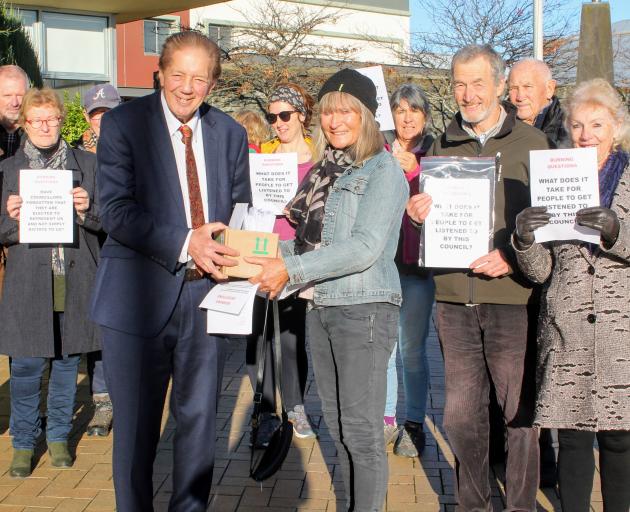 Priorities ... Mayor Sir Tim Shadbolt receives the petition from Otatara resident Penny Ivey, who collected more than 1000 signatures asking the Invercargill City Council to revisit its plans for a bequest left by a resident. PHOTO: LUISA GIRAO
Following public consultation in February, officials recommended the money go towards improvements to Fosbender Park, which would include a barbecue, seating, tables, landscaping and signage.

However, the decision did not please part of the community.

‘‘I went to the original meeting with Otatara residents and when I read that council ignored our wishes, I put a comment at Otatara Facebook community page and got so much support that I thought we should do something about it.’’

The idea was supported by Councillor Nobby Clark who said 99% of replies showed the community did not agree with the council’s decision.

‘‘The community is outraged and very angry so they are asking the council to revisit that issue,’’ Cr Clark said.

He said he council had the power to do so, but that a notice of motion would have to be signed by five elected members.

He and the mayor were prepared to do that, he said.

Sir Tim said the petition was ‘‘what they call democracy in action’’.

‘‘I think they are entitled to have their say in a project like this and I encourage people to get out and see what is happening around the city and make a stand.’’

Suggestions put forward included giving part of the money to Bush Haven, a private rehabilitation centre for native birds, or to the Otatara Landcare Group, a group of volunteers who valued the natural environment of Otatara, New River Estuary, Sandy Point and Oreti Beach.