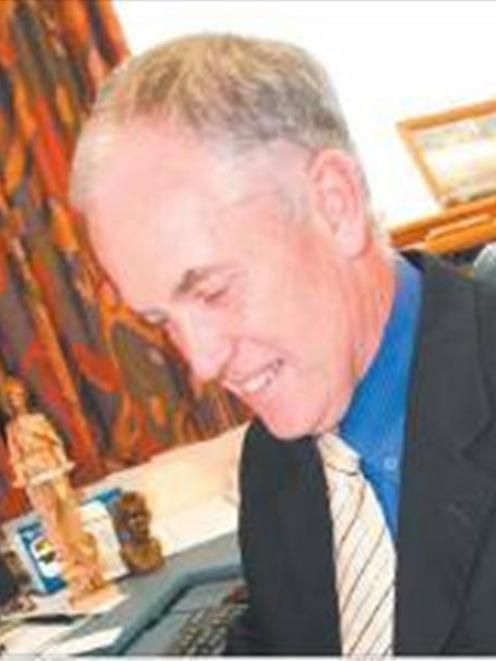 Outgoing St Peter’s College principal Martin Chamberlain
The economy may be slowing, but families are staying put in the Gore district, with many schools in the area projecting no change or slight increases in their rolls for 2009.

East Gore School principal Wes Gentle said the numbers for next year ‘‘looked pretty good''.
‘‘We are up a little with over 20 new entrants starting in the new year,'' Mr Gentle said.

Otama School principal Shona Hewlett said during the past four years the school's roll had increased from 17 to 35 and she predicted numbers would stay steady at 35 for 2009.

A new teaching area and administration block is about to be built at Otama School and, all going well, will be completed by the end of term one.

St Mary's principal Chris Moriaty said the 40 primary pupils leaving for St Peter's College would cause the roll to drop, but he expected it to bounce back in 2010.

He said it was hard to quantify the impact the dairy boom would have on the school.

‘‘People come and go during the year and I would say it probably affects the primary schools more,'' Mr Crosbie said.

Clinton School principal Amanda Taylor said dairying in the district made it hard to predict numbers for next year.

‘‘The dairy market is having such an impact - it's so hard to say,'' she said.

Both Waikoikoi and Edendale Schools expect slight increases. Edendale principal David McKenzie said the school hoped to go from a five-teacher school to six in 2009.

‘‘We are gearing towards a six teacher school and hoping to see further growth,'' Mr McKenzie said.
‘‘There are many positive things happening in and around Edendale,'' he said.

Blue Mountain College principal Kevin McSweeney said the school's roll would be ‘‘about the same''.

‘‘In these economic times there are still good jobs out their for seniors who are prepared to work hard and get their hands dirty,'' Mr McSweeney said.

‘‘We are very pleased not to have to worry about numbers for next year.''

Two other West Otago Schools, Heriot and Tapanui, predicted their rolls would remain steady next year, as did Mataura, Lumsden, West Gore and Gore Main Schools.

The roll at Waikaia School is dropping slightly, although significant growth is expected at the school in two years because of a mini baby boom in the area.

Waikaka School's roll will go down from 75 pupils this year to 60 next year. Waikaka School principal Bronwyn McCall said families had left the area in search of employment opportunities elsewhere.
By .
The Ensign
Comment now