Shark diving back from today 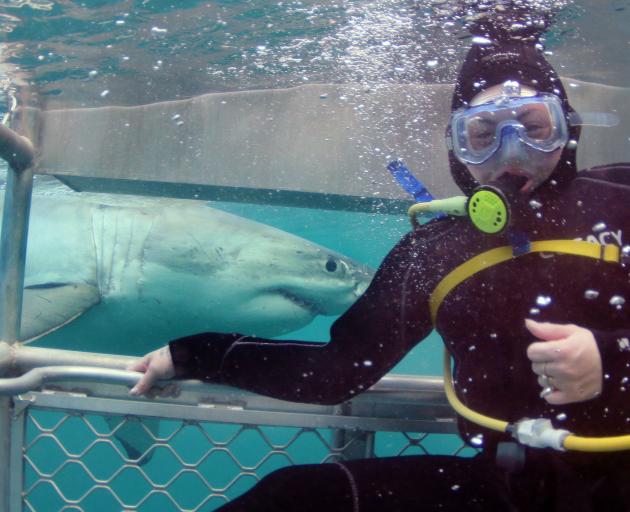 A great white shark cruises past a shark cage diver off Edwards Island, near Stewart Island.PHOTO: PETER SCOTT
Adrenaline junkies can once again swim with one of the ocean's top predators after a court ruling outlawing the practice was overturned.

Cage diving with great white sharks was ruled illegal by the Court of Appeal but Foveaux Strait cage diving company Shark Experience successfully appealed that decision in the Supreme Court and divers are allowed back in the water from today.

Shark Experience's owner-operator Mike Haines hopes to allay the concerns of the region's pāua divers, who fear the use of berley to attract sharks makes them associate humans with food, putting divers at risk.

After the court ruling was announced in October, Mr Haines said the decision means he can again use enticements to ensure the sharks come to the boats, which means he can advertise that people will see a great white shark.

He told Morning Report today there had been gale-force winds in Foveaux Strait overnight but conditions were perfect for diving.

He said as a former pāua diver, he believed great white sharks were out in the strait all the time and were just one of the many hazards facing pāua divers.

"What we're doing is making no difference to them [pāua divers] whatsoever no matter what people are saying.

"We didn't use berley last year. We actually did some trips, we came out and the sharks were swimming past us.

"Berley is no different to someone who is fishing so if they can do it why can't we?"

Shark Experience is the only company carrying out the activity. Mr Haines said he employs three staff and now that they've been given the green light to resume, he is expecting a busy summer, with strong demand coming from mainly overseas tourists.