'Something has gone seriously wrong' 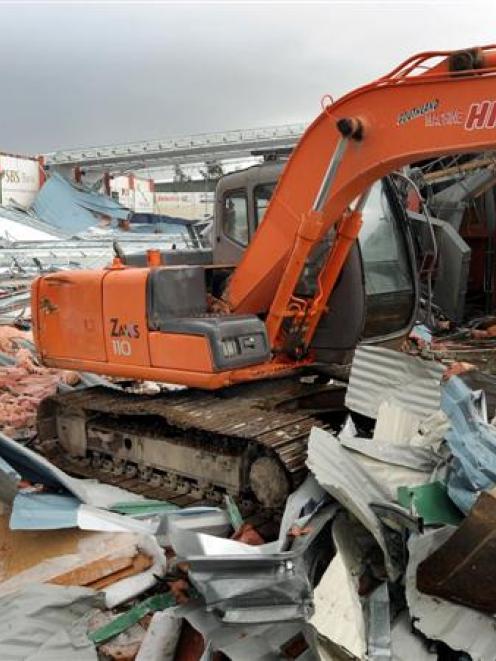 A digger sits among the rubble of what was Stadium Southland after demolition work was halted yesterday because of wind and rain. Photo by Stephen Jaquiery.
Speculation over the collapse of Stadium Southland by Invercargill Mayor Tim Shadbolt has been dismissed as electioneering, but he maintains there were concerns with the structure from the outset.

Demolition of the 10-year-old facility is earmarked to begin today - weather permitting - but a report on why heavy snow led to the collapse of the roof may be weeks away.

Mr Shadbolt, who is standing against entertainer Suzanne Prentice in the Invercargill mayoralty contest, said there had been concerns over the stadium when it was constructed and he was simply airing those views.

Representatives from Invercargill City Council, and the Stadium Southland Trust, which own the building, met yesterday to review council files relating to the building of the stadium.

Prime Minister John Key said Minister of Building and Construction Maurice Williamson would go to Invercargill to find out why the roof of the $10 million stadium collapsed under the weight of snow on Saturday.

Mr Key said the Cabinet discussed the roof collapse and decided it needed to know what happened.

"This is actually a modern building that has collapsed under a very small amount of snow relevant to what the Building Code indicates it should be able to withstand," he said at his post-Cabinet press conference yesterday.

"So something has gone seriously wrong there, and I think we need to understand that a little bit better."

Mr Shadbolt said the building had been given a code of compliance with the building code standard at the time, but suggested there was always speculation the roof pitch was too flat for Southland conditions.

The stadium roof was lowered to appease neighbours and there were problems with its roof during the construction phase, which added to speculation in the community, he said.

It has emerged that during construction there were problems with the roof when several of the huge steel trusses across the community courts - the area where it collapsed at the weekend - had sagged following installation.

Ms Prentice was opposed to "pointing the finger, until you have all the facts".

"You need to galvanise the community. It has happened; now get it rebuilt."

Mr Shadbolt said he was not electioneering - "Why would I wait until a disaster to try and win some votes".

He said it was a miracle no-one was killed and the collapse of the roof gave the city an opportunity to build something that could stand up to whatever Mother Nature offered.

Since the stadium was completed in 2000 loadings standards, which take into account the region, and height above sea level, have been revised to much higher standards.

The Institution of Professional Engineers New Zealand issued a statement yesterday saying it would be possible, once the details of the collapse were known, to assess whether the conditions exceeded those loadings or if the building failed prematurely.

"Should we find that there is cause for concern in regards to the standard of engineering work, we have a process to deal with that.

"If there is a need for the loadings standard to be reviewed then IPENZ would certainly act," chief executive Dr Andrew Cleland said.

Southland Indoor Leisure Centre Charitable Trust chairman Acton Smith said the stadium was designed and built to the highest engineering standards, was peer reviewed and then approved by the Invercargill City Council.

"It was built absolutely to code."

Mr Smith estimated more than 600 tonnes of snow was on the stadium roof at the time it collapsed, and statements by the mayor over concerns about the stadium at the time of construction could be faulted.

"I think the political people will use anything like this for their advantage ... we are trying to de-politicise this."

Mr Smith said he had yet to speak to Mr Shadbolt about the collapsed structure, but it was unhelpful to speculate until due process had been carried out and we "determine what is the cause of the collapse".

"If there had been issues, none had been brought to their attention."

Invercargill engineer Graham Cole would work on an independent structural engineering review over the next couple of weeks, to ascertain why the stadium collapsed, Mr Smith said.

The findings would be made public to avoid further conjecture, he said.

Insurance cover of $40 million, which included full replacement, staff costs and loss of income, would enable the stadium to be rebuilt to "the same envelope", thus avoiding any lengthy resource consent delays.

Mr Smith said his son, daughter and three grandchildren were leaving the facility at the time it collapsed, and it was incredible no-one died, given there was a netball tournament the week before, and the Craft Show scheduled for this week.

Rebuilding Stadium Southland could start as soon as next March, but it was forecast wind and snow which was occupying their minds yesterday.

Demolition work due to start yesterday was delayed because of bad weather, and security guards were keeping people away from the collapsed structure amid fears it was unstable and wind gusts would send loose roofing iron flying through the air.

The stadium's assistant manager Raewyn Rogers said March was the earliest they could get building consent, plans and builders and start rebuilding.

Operation's co-ordinator Ryan Sycamore said he still could not believe the stadium, where he has worked for 10 years, was a tangled mess of steel and iron.

He was confident a better venue would be built which took in to account the good and bad aspects of the damaged structure.