By Laura Smith
0 Comments
A Southland aquaculture agreement signed yesterday has highlighted a changed relationship between iwi and the Crown.

The Southland Aquaculture Agreement — seven years in the making — was signed in Bluff yesterday.

The agreement provides Ngai Tahu marine space to develop aquaculture in a 16.6ha area and the package has a value of about $4million.

Conservation Minister Kiritapu Allan said the day’s event was significant in terms of honouring the settlement and agreement, as well as recognising the landscape of the region’s economic need. 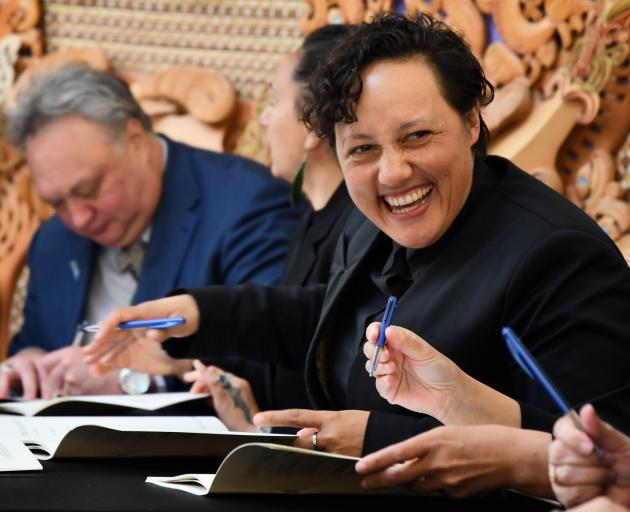 Conservation Minister Kiritapu Allan signs the Southland Aquaculture Agreement in Bluff yesterday. PHOTO: LAURA SMITH
She explained the historical context that led to yesterday’s signing, and said aquaculture issues had been a well-traversed area of litigation, negotiation and contest of ideas since the 1980s.

"There have been several iterations of the Crown working with, sometimes against, sometimes with iwi and their aspirations."

It had been a tumultuous journey and a lot had changed in the 40 years since.

"It’s very easy to forget the people who have shaped events other people have built on."

He encouraged progress to continue and not waiver now the settlement had been signed, and felt there were many opportunities besides salmon farming.

The Government had been settling claims through the Maori Commercial Aquaculture Claims Settlement Act since 2004, which provided for claims to be settled by allocating authorisations for 20% of aquaculture management areas to iwi.

There have been seven settlements delivered, with several active negotiations including one starting in eastern Bay of Plenty.

Iwi will still need to apply for resource consent for any marine farming activity and the decided-on Southland area was located close to the Ngai Tahu Seafood project Hananui Aquaculture.

Hananui Aquaculture has plans for a salmon farm off Stewart Island which is separate from yesterday’s signed agreement.

No concrete plans have been decided on what to do with the 16ha off Stewart Island.