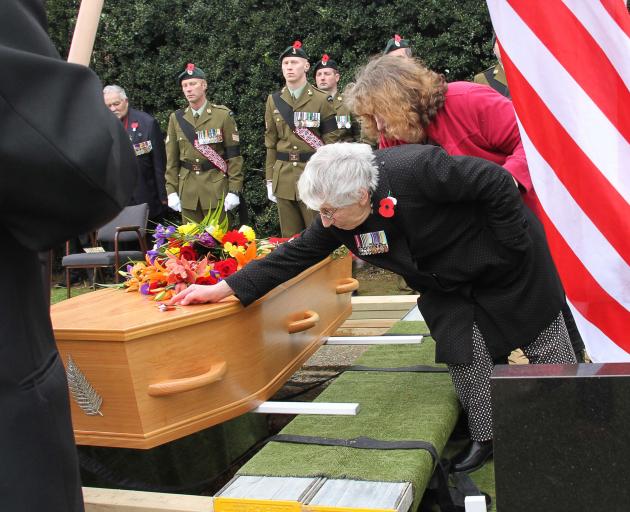 Kathy Wright, sister of Corporal Allister George Buchanan, says farewell at the graveside in Wallacetown. Photo: John Cosgrove
More than 60 years after  losing their loved one, a Southland soldier’s family has finally been put at ease.

The body of  Corporal  Allister ("Buck") Buchanan, who died while serving with the New Zealand Army SAS in 1957 and was buried in Malaysia, arrived  home on Saturday and was buried in a family plot at the Wallacetown New Cemetery, near Invercargill.

Cpl Buchanan’s casket was flanked by family members who accompanied it  to his final resting place.

His younger sister, Kathy Wright,  said the memorial was "heart-warming" and a time for celebration.

"It was like the different times that the sun comes out. It was like as if it was beaming down joyousness - he’s home.

"And when they lowered him, it came out brighter still," she said.

Mrs Wright (79) said she was just 18 when her brother died and had since focused on having him returned home.Cpl Buchanan was one of 27 former servicemen who had died while serving in Thailand, Malaysia, Singapore and Vietnam (1955-71).

His body was  repatriated under the New Zealand Defence Force project Te Auraki (The Return).

Mrs Wright, who travelled to Auckland to welcome her brother back on to New Zealand soil, said flying  back to Dunedin with him was a special time.

"When we were flying south, I thought, he’s got wings, he’s flying too, and he’s coming home."

"He’s come home, and I feel as though a brother has come back," he said.

While the decades-long wait for the return of Cpl Buchanan "should never have happened" the memorial to welcome him home was a beautiful one, Mr Beker said.

"We wanted to make it special for him, hence the flags, the guard of honour ...  I’m proud of the way they did it."