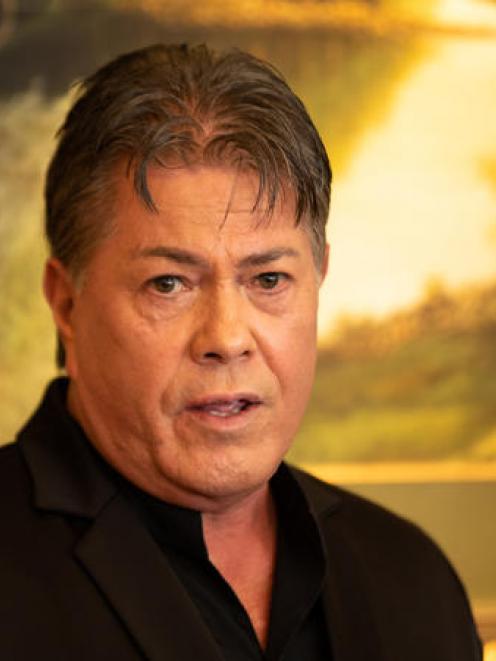 Brian Tamaki. Photo: ODT files.
Destiny Church leaders swapped Invercargill for Queenstown to hold its Sunday service as they were prevented from using their original venue.

Speaking to an audience of what they said was fewer than 20 people, Brian and Hannah Tamaki used the opportunity to chastise the media for bringing to light their late-night exodus from Auckland in order to avoid the city’s lockdown.

Criticism of their leaving Auckland was voiced by both Invercargill Mayor Sir Tim Shadbolt and Southland Mayor Gary Tong.

During the service, Mr Tamaki explained a directive had been given to the pastor of the Invercargill venue to not hold the service.

He said this was given to pastor Ash Cain, of Elim Community Church.

While the Otago Daily Times attempted to contact Mr Cain yesterday, he could not be reached for comment as to where the directive came from.

The Tamakis lashed out at politicians, including Prime Minister Jacinda Ardern, and other churches for failing to come to their aid as news of their actions sparked nationwide outrage.

Starting proceedings, Mrs Tamaki appeared to welcome First Up along to the Sunday service, which was streamed live on Facebook.

The pleasantries, though, were short-lived; followed as they were by accusations from Mr Tamaki of the media engaging in witchcraft and demonic behaviour.

"The media is the substitute for the preacher. That’s why it’s Jezebel, it’s witchcraft. Gotta repeat that in case the media are watching. You’re in a spirit of witchcraft.

"You dupe people — you put a spell through writing and you then begin to dictate the narrative to try and set up a culture of evil or a culture that takes it away from Christ, so they can bewitch a whole nation."

Of Sir Tim, Mr Tamaki called him that crazy guy, after seemingly forgetting his name and being reminded by service-goers.

"All of the media hype and craze and discrimination and the whole South Island almost — well, not all of them there’s some good South Island people. I love the South Island.

"But there are some demons in the North Island and in the South Island, I’m telling you, that ... need to be cast out."

Mrs Tamaki acknowledged the media attention by calling her husband "the trouble maker of Israel — or New Zealand".

"I will say things in the moment when I am in the Apostle, not Brian. Sometimes Brian gets it right a lot of the time and sometimes he doesn’t," he said.

"But the Apostle, so that’s the God in you ... will always speak life."

The majority of the service, though, consisted of Mr Tamaki slamming those who covered the story or criticised the couple.

He even blamed them for the recent earthquakes and tsunami warning.

"And so suddenly you get the biggest earthquake — I think one of the biggest in the history of New Zealand — that follows after the ravaging of Christ on the Wednesday.

"Come on, if we weren’t persecuted that one day, you fellas had got that right, you could have an excuse to say there’s no connection.

"No, no, no, no you can’t because you went after us." — RNZ/Additional reporting, Laura Smith