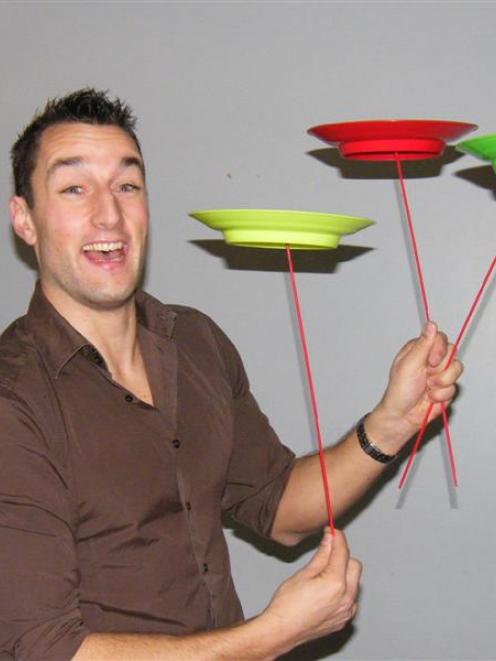 Mr Moir has trained as a circus entertainer and is now a singer/ dancer on cruise ships.

He attended the University of Otago and obtained a degree in biochemistry before deciding that was not the career direction he wanted to pursue, so he signed up for a course at a circus school in Christchurch.

The Ensign caught up with Mr Moir while he was home in Gore between cruise ship stints.

He had been working as an entertainer on cruise ships for about four years and usually rehearsed for between two and three months before working on cruise ship for about six months, he said.

Mr Moir described himself as classical theatre dancer.
While he was based in New Zealand, he started his entertainment career in London where he auditioned for ‘‘anything going''.

To obtain work on a cruise ship entertainers had to secure a con tract with an entertainment company, which was then contracted to the shipping company.

He described the audition process as being ‘‘exactly like American Idol''.

Those auditioning were competing against a wide variety of people, from those just off the street to professionals, he said.

Often an audition was over in a matter of minutes and it was on to the next.

‘‘You have to have a spine of iron - you just get shot down all the time,'' he said.

His singing debut was with the Queen song This Could Be Heaven.

While it was a completely different experience having to sing, he now enjoyed that aspect of entertaining.

Being on a ship for long periods of time had its advantages - it could be a good way to save money as food and a shared room were provided, but there was one down side: he had to pay for the alcohol he drank.

At the end of each month he was presented with a bar tab and that could be a nasty shock some months, he said.

He said he had no regrets about the career path he had taken and would ideally like to spend another five to seven years on cruise ships.

It was a good way to see the world.

He would like to move up the ladder to the position of cruise director, he said.

During a break from his cruise ship entertainment work, Mr Moir has been passing on his circus skills to the district's school pupils and groups, including the town's Oscar programme participants.

During the school holidays Mr Moir is hosting a circus workshop at St Peter's College gym, from Monday to Friday, July 6 to 17, from 9am to 3pm.

Those taking part in the workshop will learn a variety of acts including stunt falls, break dancing, juggling, tumbling, trapeze and clowning.