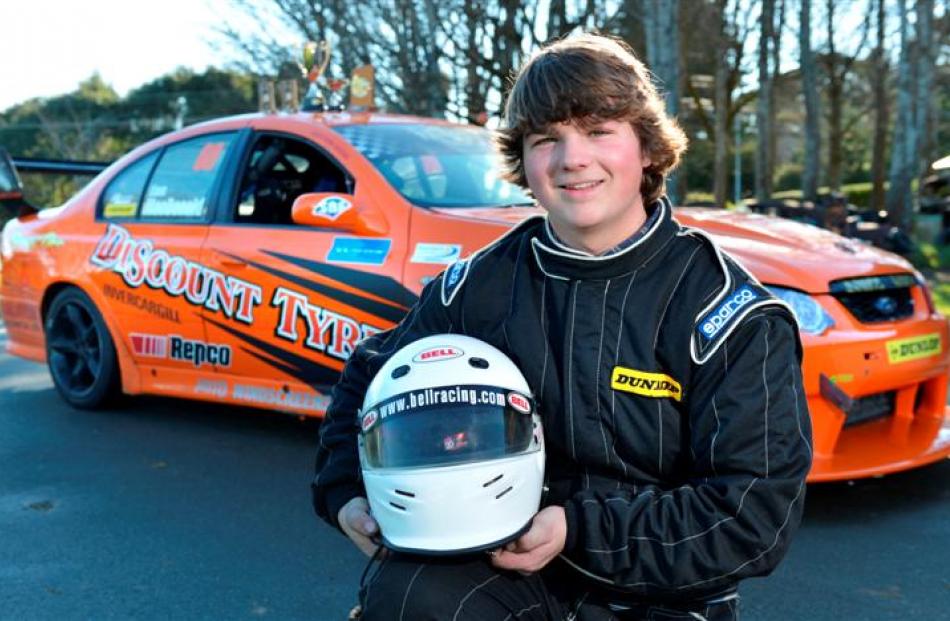 Looking at Liam MacDonald, you would never guess he has an alter ego - in his spare time, the quietly spoken year 11 James Hargest College pupil is the ultimate boy racer.

Over the 2012-13 motorsport season, when he was just 15 and too young to hold a driver's licence, he became the youngest driver in the NZV8 championship, and earlier this month was named the youngest club champion in the history of the Southland Sports Car Club (SSCC).

Taking on drivers twice and three times his age, his best placing in the V8s was third in a race in Timaru in January, and he managed a top speed of 240kmh at Pukekohe in April.

''When he gets behind the wheel and puts his helmet on, something happens. He drives flat out,'' his father, Robin, says.

But Mr MacDonald, a former SSCC champion for many seasons in the 1980s and early 1990s, says his son has natural ability and the potential to go far.

Liam learnt to drive an old Ford truck on the family farmlet when he was 12, but it was only in September last year that he took an interest in motor racing, competing in a Honda ''paddock car'' in SSCC ''motorkhanas'' designed to test the skills of novice drivers.

''I was driver of the day at my second meeting. I was pretty happy about that.''

When Mr MacDonald found a Falcon V8 going for a good price in Auckland, he bought that too and he and Liam have spent many hours upgrading it inside and out.

When truck racer Inky Tulloch saw Liam racing at Teretonga, he was so impressed he arranged for Liam to be given a dispensation to race in the NZV8 competition, Mr MacDonald said.

Liam knows what he likes about motor racing: ''I like going fast and beating other guys.''

And he knows what he wants to do in the future - his ultimate aim is to be a professional racing car driver, with a job as a car fabricatoron the side.

June 11 was a red-letter day for Liam. It was his 16th birthday and the first thing he did was get his learner driver's licence.

He doesn't own a car himself yet but at least he can now drive himself to school - on his 50cc Suzuki scooter.