By Marjorie Cook
0 Comments
Wanaka Theatre Group wardrobe mistress Susan Manson will take a final bow this weekend on behalf of seamstresses who have built a large theatre costume collection for the town.

About 10,000 items will go on sale at Queen’s Birthday weekend and the vintage collection is attracting national attention.

"We have to sell everything ... We don’t hire anymore, we don’t do shows anymore. The council is going to do ground works under [the building where the collection is housed] here, so we had to move and we took the opportunity to pass things on and give them a second life. Hopefully people will love them and wear them," she said.

"I think there are definitely several thousand pieces of clothing and then we have all the hats, all the bags, all the gloves, all the shoes, all the scarves, all the belts and other random bits, sewing pieces, so there is probably upwards of 10,000 items," Ms Manson said.

Margaret Trimble, who died in 2005, founded the wardrobe.

"She started doing the costumes, building the resource, and asked me to help out ...

"My mother [Frances] was involved as production manager for several years so I got dragged in to other things as well, such as box office and props. We did a lot of shows.

"We used to do one big musical and then next year something smaller, like a variety show, all in the old hall." 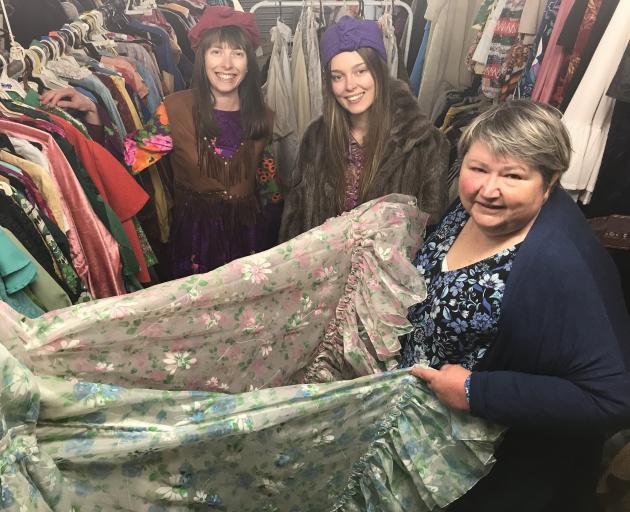 The furs, in their time, would have been quite posh.

"This is a stoat neckpiece that you could fancy around in for afternoon tea. The poor little thing has a couple of feet, an eye and two tails. I am not sure where it got the spare one from. But you just throw it over the shoulder, put your hats and gloves on and go have a cup of tea . . ."

"Women would bring all these posh clothes and find out Wanaka wasn’t posh. But these [rabbit furs] will be 50, 60 years old. I know furs have ethical problems but these guys are vintage, have been long dead and deserve another life."

Ms Manson has made many good friends over years in the wardrobe, including Mount Aspiring College students who helped her in the community programme.

"I am sad that the resource is going to be gone. Some things I am quite emotionally attached [to]. Others I am just glad they are going to be used again ," she said.

The Wanaka Theatre Group’s Clothing, Collectables and Costumes Sale is on June 4-5 between 9am and 4pm at the Wanaka Showgrounds, McDougall St, behind the A&P Show building.