0 Comments
A five-year passion project at Wanaka’s urban wetland, Bullock Creek, has reached another milestone, with interpretative panels installed beside the boardwalks.

She and Wanaka graphic designer Eddie Spearing combined forces to create four panels telling some of the stories Mrs Howarth has collected.

"I was nabbed for the job within about a day [of joining the committee]. ‘We’ve got a job for you,’ they said. But it has been pretty cool finding out information and lots of stories," she said.

Mr Spearing said it was satisfying to complete the project after months of discussing what to show and tell.

The duo discovered different attitudes towards the creek over the years, including how it was used by early settlers and how it was regarded now. 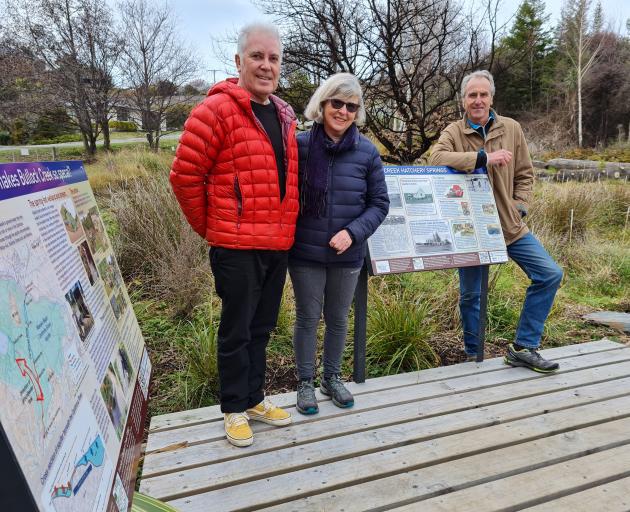 "It’s been used as a drain, there was a piggery and a slaughterhouse, people threw their cats and dogs in it, typhoid is part of the story, and there are still remnants of that attitude. We want to protect this rare, spring-fed creek," Mrs Howarth said.

The Bullock Creek wetland is on a former hatchery site owned by the Otago Fish and Game Council and is fed from the Cardrona aquifer.

Fisheries ranger Paul van Klink and a Department of Corrections labour force were among many who had worked hard to restore the wetland, Mr Gardiner said.

"In October, we are planning a five-year celebration. We are hoping some of the Corrections people will come to that. They do come back already and bring their families."

The three main issues for Friends of Bullock Creek now were maintaining water quality, negotiating long-term ownership in perpetuity, and attracting more volunteers to help maintain the completed work and work on future stages of restoration, he said.