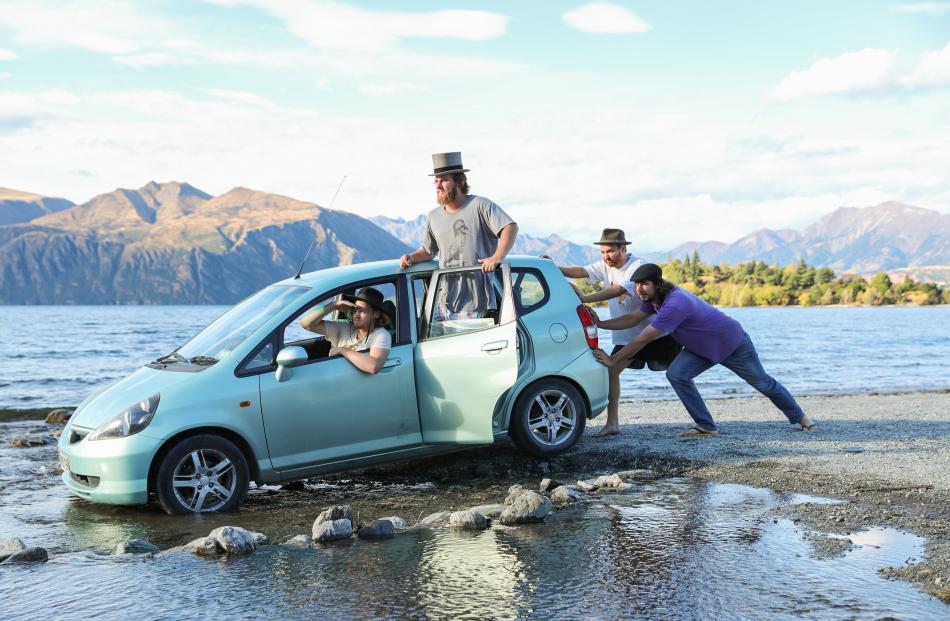 Preparing for their huge journey across Europe and Asia as part of the Mongol Rally are Wanaka quartet (from left) Conor Rutherford, Jonty Barton, Nick Ainge-Roy and Quinn Thompson. Photo: Supplied
It started as an idea in a high school classroom.

Six years later, it is about to become a reality.

Four Wanaka lads are preparing to head overseas to take part in the 16,000km Mongol Rally from London to Siberia that starts in July, a trip they describe as a ''once-in-a-lifetime opportunity''.

Conor Rutherford, Quinn Thompson, Jonty Barton (all 23) and Nick Ainge-Roy (22) make up the team A Horse With No Name, tasked with travelling across Europe and Asia in a car limited to 1000cc.

The foursome had been planning on taking part in the rally for years, since Mr Thompson suggested it one lunchtime at Mount Aspiring College.

Those plans were put on hold while they all attended university, but upon finishing at the end of last year, it was put back on the table.

''We never thought we'd actually get round to it, but now it's come at the right time,'' Mr Ainge-Roy said.

''There aren't many experiences like this that you can do with your friends.''

Their route will take them through 20 countries, including many off the beaten track such as Armenia, Iran, Turkmenistan, Uzbekistan and Kyrgyzstan.

No-one in the group had ever done such a journey before, although Mr Barton did note they ''went camping up the West Coast once''.

One of the rally rules is to raise money for charity, and the group have decided to raise $5000, to be split between Wanaka Land Search and Rescue and the race charity Cool Earth, which protects rainforests around the world.

The group has started fundraising and plans to hold a sausage sizzle and raffle in the coming weeks, before Mr Thompson heads to the United Kingdom in May, in search of a team vehicle.