Golfers could soon be teeing-off in the Cardrona Valley if a proposed ''alpine links'' golf course goes ahead. 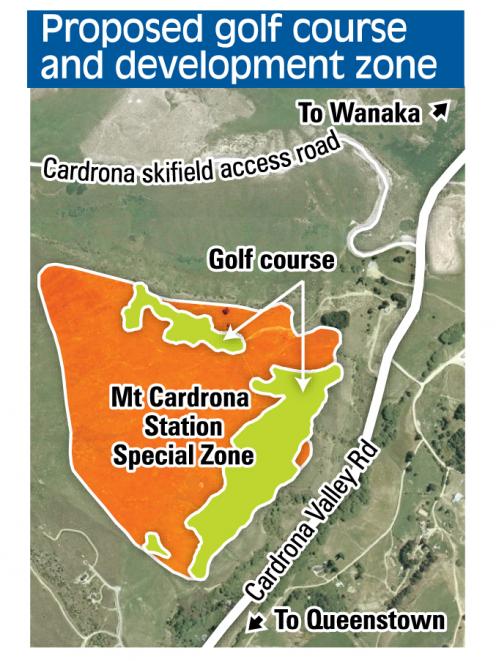 Mt Cardrona Station Ltd has requested a plan change which would allow a 12-hole golf course to be built about 2km north of Cardrona township.

Plan change 52, as it is known, will be discussed at a meeting of the Queenstown Lakes District Council's planning and strategy committee tomorrow.

Changes would be made to the Mt Cardrona Station Special Zone (MCSSZ) which is part of the council's district plan.

Established in 2011, the MCSSZ allows commercial, residential and visitor accommodation to be developed in the 131ha zone next to the Cardrona Valley Rd.

So far there has been no development.

As well as golf course provision, the plan change would replace a proposed village green area with a village square or public space which would better fit the commercial needs of the area, such as golf pro shop, clubhouse and hotel.

A car-parking and shuttle bus area for the Cardrona Ski Area would also be included, as would the potential for a gondola leading to the ski area.

In the change proposal, compiled by Queenstown-based planning company Brown and Company, the effects of the global financial crisis were cited as one of the reasons for the lack of development at the site.

Another was the uncertainty about whether the type of development allowed in the zone was the right mix for the area.

If built, a well-designed golf course would allow the Cardrona area to follow the trend of Wanaka, Arrowtown and Queenstown in becoming a year-round tourist destination, the proposal stated.

After five years of inactivity in the area, the plan change and development of a golf course would likely result in renewed commercial interest.

There had already been approaches from four hotel operators about a potential four-star hotel being built.

A report by the Golf Strategy Group, of which Mr Turner is a principal, found a 12-hole course, rather than a nine or 18-hole course, would be a better fit for the area.

Ideally, a ''links-style'' course would be developed, to take advantage of the alpine environment and offer a distinct style of play, the report found.

Cardrona Valley Residents and Ratepayers Society chairman Blyth Adams said the society was pleased a process for development had started.

''We're totally supportive of the process getting started ... whether residents support the actual proposal or not isn't something which can be decided until it's under way.''