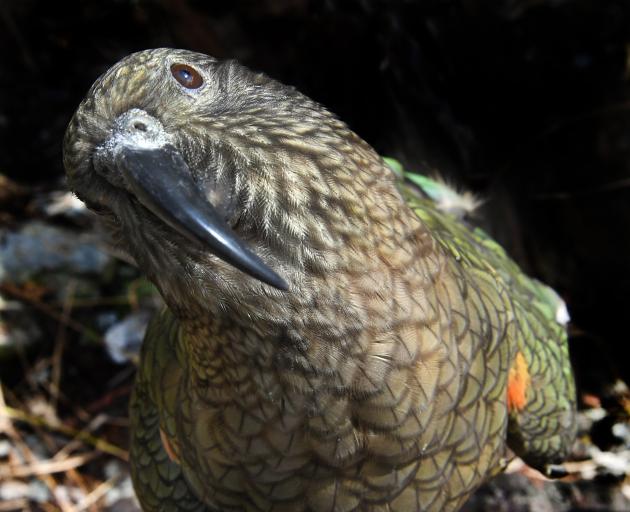 Kea are believed to be the culprits in overturning traps meant to protect them. PHOTO: STEPHEN JAQUIERY
A booming bunch of mischievous kea near Wanaka have outsmarted the traps set to protect them.

"We were finding all these stoat traps had been turned over and some looked like they had been vandalised.

"But then we also found damaged traps up the Young River and other places where no-one ever goes, so it was obviously kea."

Mr Penniket said the birds were turning over the traps to break the chicken egg bait inside then drink the raw egg when it seeped out.

There was also evidence they had used a stick to make a hole in some eggs.

In two or three older traps, the kea had managed to undo screws, and traps had been found either bent or with their open wire grille deliberately removed, Mr Penniket said.

He said kea-proofing traps was quite a lot of work as it involved volunteers carrying metal posts, each weighing 2.5kg, up the high mountain valleys and hammering them into the traps to pin them to the ground.

Strips of metal had been strategically attached under the older traps to stop the kea undoing the screws and removing the back of the traps, but the traps’ damaged wire grilles would have to be replaced, Mr Penniket said.

Kea eggs and chicks were extremely vulnerable to introduced predators as they made their nests on the ground or in rock crevices and took up to four months to raise a clutch of eggs to be free-flying fledglings.

For 20 years, Mr Penniket has been setting Forest & Bird predator traps in collaboration with the Department of Conservation but kea had only recently reappeared in the Matukituki Valley in significant numbers.

"All these juvenile kea hanging around in mobs — people have not seen that since the ’70s."

Mr Penniket said the return of kea to the area was due to predators eating 1080 poison and continual trapping.

"This is wonderful news. It looks like the predator control has been highly beneficial for this population," she said.