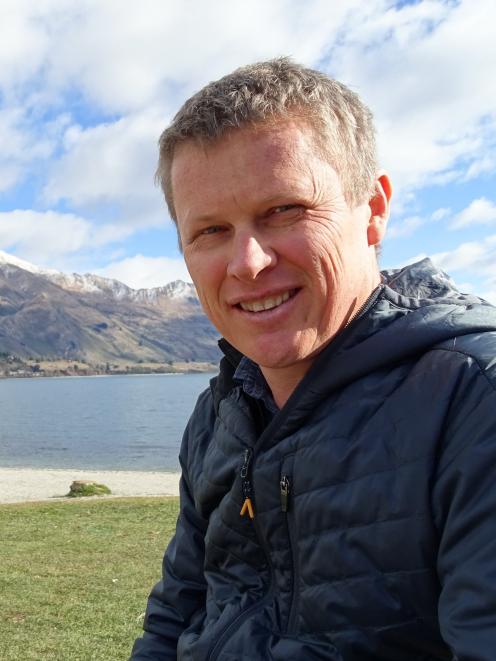 James Helmore. PHOTO: KERRIE WATERWORTH
Border closures have sent New Zealand’s tourist industry into a nose-dive. Despite a government handout to regional tourist organisations, they are feeling the pinch.
Ahead of this week’s funding announcement,  Lake Wanaka Tourism, which received $700,000, had considered a restructure.  Former general manager James Helmore, who resigned last week, talks to Kerrie Waterworth about his time at the helm.

Why did you decide to leave Lake Wanaka Tourism?

It was time to pursue other opportunities. I had been with Lake Wanaka Tourism for 11 and a-half years, and before that I was in Queenstown for 10 years. Tourism has been a part of my life for 21 years, so it was time to move on.

You must have seen a lot of changes in Wanaka in your role?

It has gone through a significant period of change in that time and I have dealt with all of that and had a whole lot of fun responding and reacting, working out ways of capitalising on things that were happening at the time.

The growth had actually been happening for a while and it was building up and up and up, and then it just accelerated. The Wanaka region has always had a really strong stable domestic market and it has been growing as New Zealand’s population has grown.

However, if you look at the number of international arrivals over 2014, 2015, 2016, they really accelerated with the opening up of routes and capacities into different countries.

It was like turning the tap on for all of New Zealand but it was a really significant period of growth for Wanaka.

New Zealand is promoting this image of sustainability in tourism. Do you think we managed the growth sustainably, or did it get of hand?

That is an interesting question because in terms of "visitor experience", visitors were rating it as very, very high, to the point that the Wanaka region was comparing very well to destinations around the world.

I think where the challenge ... with all the growth in tourism was in our community’s perception and understanding of it.

That came through really clearly in lots of surveys we have talked about previously.

Of course, since then the Covid-19 lockdown has given us this chance to look at what "no tourism" looks like and reflect on that.

As tourism rebuilds I think it will need to make sure it delivers to community aspirations and values and to deliver to the environment and to deliver economically.

It is not one at the expense of the other.

I think that is a really strong sentiment within our community now and it has been for quite some time.

Do you think the proposed redevelopment and expansion of Wanaka airport was a catalyst for that?

The Wanaka airport expansion was probably a flashpoint for many, but there are other triggers that have captured the community sentiment.

For the likes of the Queenstown Lakes District Council trying to plan for that within its planning framework and Local Government Act, it is really difficult.

A number of other places around New Zealand experienced the same sort of situation.

What is your reaction to the idea of a new international airport at Tarras?

It is an interesting concept but I think it really comes down to what is the community’s appetite for it, and that is not only the Tarras community, it is also the Queenstown and Wanaka community.

It really needs to deliver to the community’s aspirations in that space.

Do you think this is a case of those in Christchurch making decisions just for their shareholders?

An airport out in the Cromwell basin has been mooted quite a number of times and for some time.

It was one of the scenarios MartinJenkins consulted on, on behalf of the Queenstown Lakes District Council, so it certainly was a known option.

What are your thoughts about the Tarras airport if you factor in climate change and changing tourism patterns post Covid-19?

Reflecting back over your 11 and a-half years, what were your biggest and most satisfying achievements?

That is a tough one — I have not even reflected on that one myself yet. Probably one of the things that I look back on most fondly is the way our businesses have flourished and grown but the business owners have stayed true to who they are and the values that are important to them.

As we have grown as a region we have seen more opportunity for businesses being set up and that has really broadened the offering that is available to visitors and what a lot of people don’t realise is what the Wanaka region has to offer is top class, it is world class.

What are your plans for the future?

My immediate plans are to spend time with family.

It has been a real privilege to represent the Wanaka region and its businesses, it was a treasured memory and period in my life.

But I am now looking for something I believe in and will be passionate about, and something I can make a difference in.