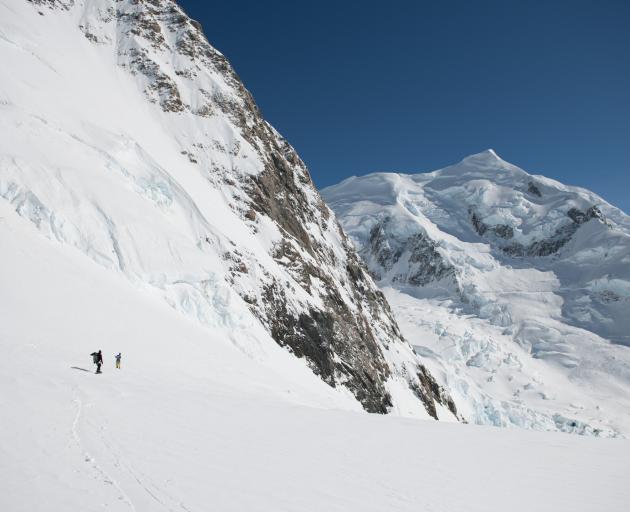 The 40-minute film, The Sky Piercer, is directed by Wanaka film-maker Jason Hancox. It follows a team of adventurers, including fellow Wanaka men Sam Smoothy and Fraser McDougall, climbing and skiing down the east face of Mt Cook last spring.

Mr Hancox said the film had been in the pipeline for a while for him and Mr Smoothy.

"For the past 10 years we have had many a beer discussing how we would make this film.

"There was also a whole bunch of luck - the weather window and the conditions were all out of our control but lined up perfectly."

Mr McDougall, a long-time friend of Mr Smoothy, told the Otago Daily Times earlier this week the expedition was "an absolute dream".

Not originally part of the team, he said he "kind of hijacked my place in the project".

He said skiing down the face was not too difficult, but any mistake could be fatal.

"The whole bottom of the east face is an ice cliff; there's only one or two spots to get through. If you fall on the face you'd slide right off the cliff and that'd be it."

Mr McDougall said the film would appeal to many, even if they did not like skiing, and was a "showcase of our backyard".

He thanked Audi for backing the project with a big budget, and knowledgeable locals Guy Cotter, Gavin Wills and Hugh Bernard for their advice.

The film will make its world premiere tomorrow afternoon at the festival.