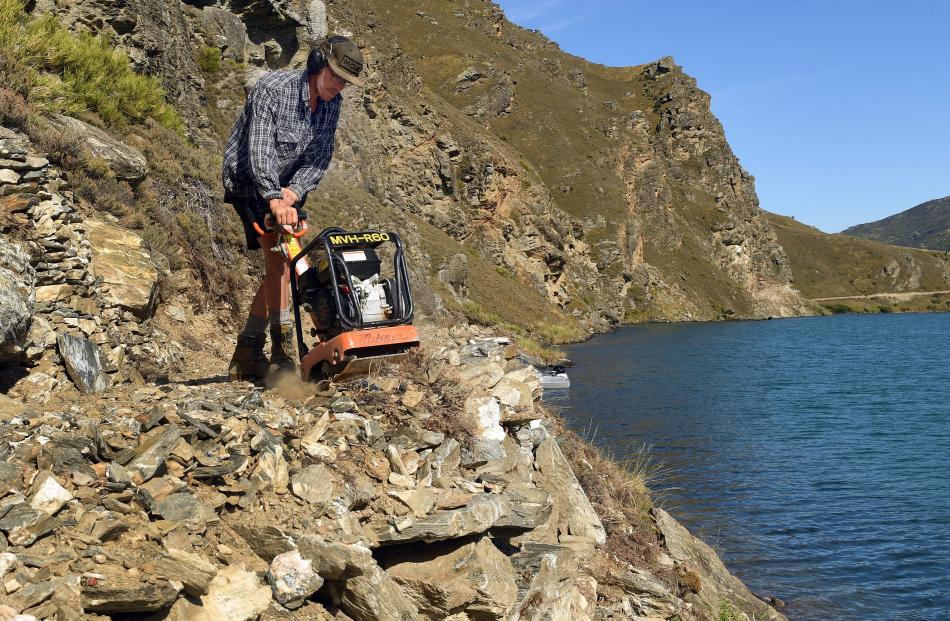 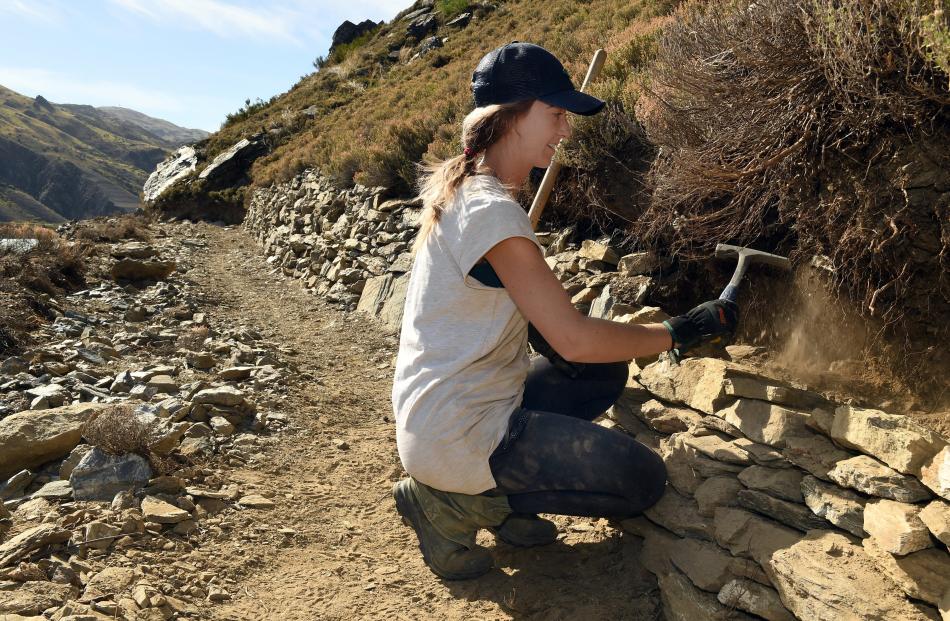 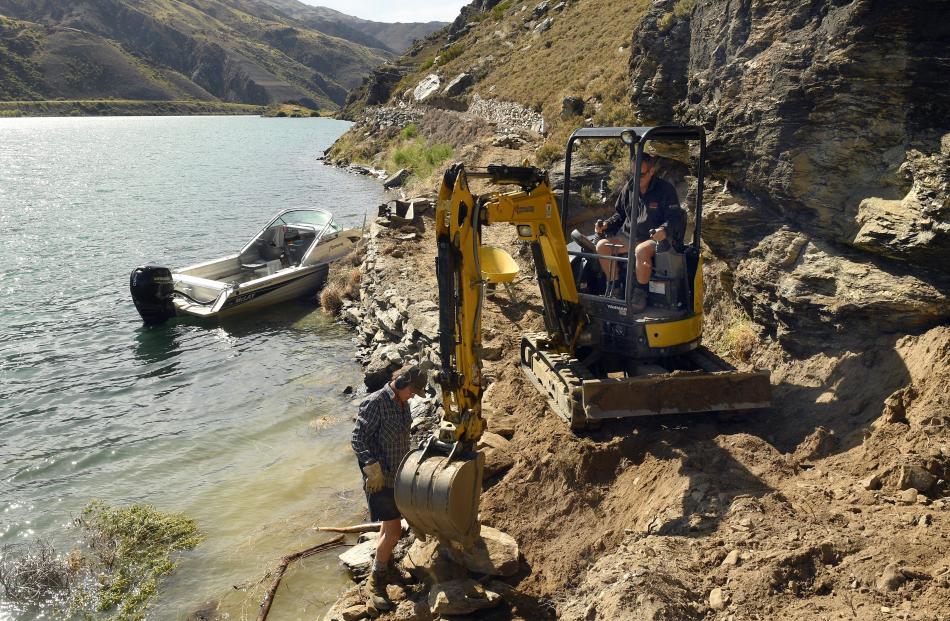 Brent Ward, of Lowburn, positions a rock under the watchful eye of Jake Schofield, of Timaru, during the trail’s construction. 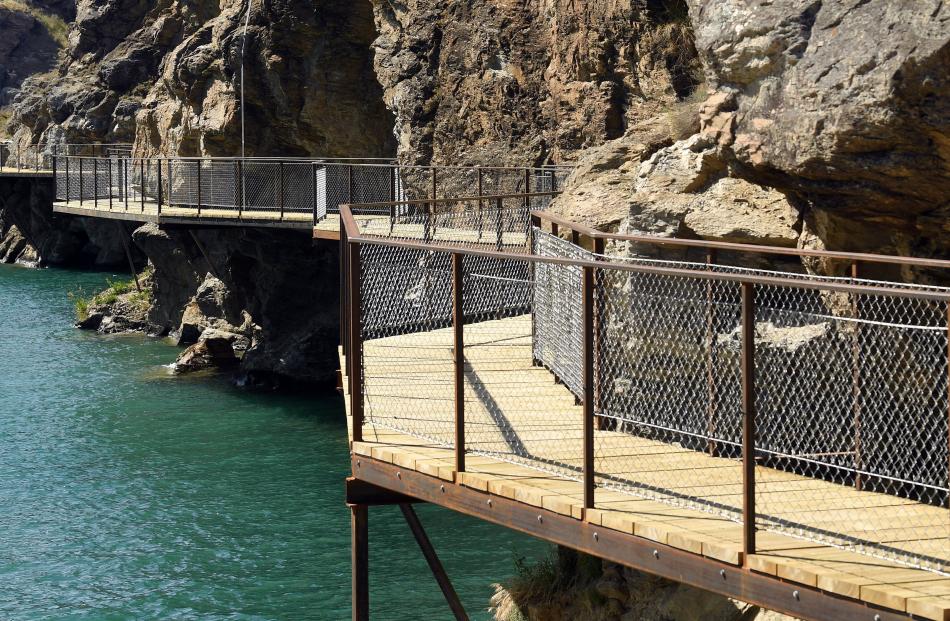 A clip-on bridge traverses a rock face on the trail. 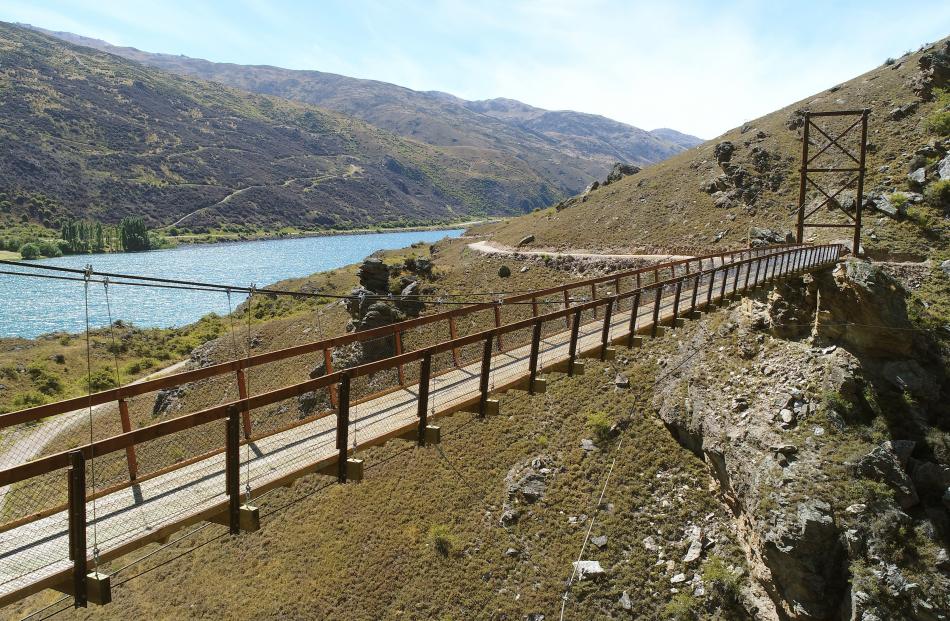 A suspension bridge spans a ravine on the Cromwell Gorge cycle trail. 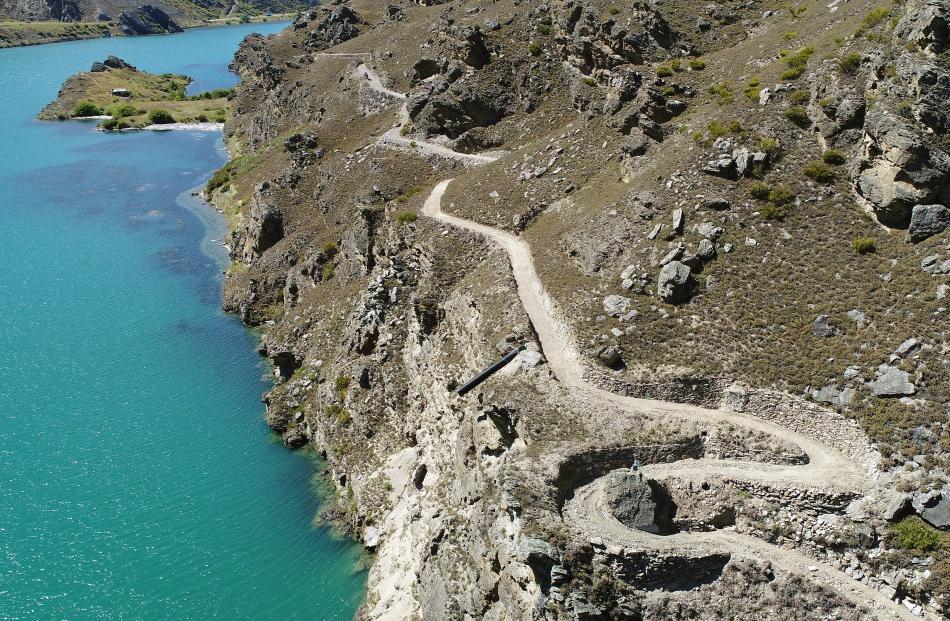 A switchback eases a steep climb on the trail.
It has been years in the planning and millions of dollars in the making, but the cycle trail through the Cromwell Gorge is finally nearing completion.
Otago Daily Times chief photographer. Stephen Jaquiery and Wanaka reporter Mark Price took a look recently at what is shaping up to be New Zealand’s most spectacular cycle trail accessible to all.

Cyclists using the new Cromwell Gorge cycle trail will have to be careful not to get the wobbles.

They will be tempted to look up at the spectacular rock faces towering over the track - and risk a dip in Lake Dunstan.

The best advice might be to "cycle, stop, look" so as to avoid "cycle, look, splash".

The world has plenty of dangerous - crazy even - cycle trails, but the Cromwell Gorge trail is not designed to be one of them.

Central Otago Queenstown Trail Network Trust chairman Stephen Jeffery emphasises the trail between Pisa Moorings and Clyde, via Cromwell, is for cyclists of average ability, whether under their own or electric power.

It is meant to be a pleasant experience rather than a major challenge.

Asked about the danger of rockfalls, Mr Jeffery said the resource consent for the trail required that loose rocks above the trail in some places be removed, and most of that work had been done.

Cyclists will get the chance to try out the $6.5million trail after the official opening towards the end of March.

It had been hoped it would be ready by Christmas but construction is behind schedule, mainly because of the Covid-19 pandemic.

However, contractors working on different sections of the trail are now close to linking up — ready to carve out the final section around the precipitous Waenga Bluff.

"The guys that are doing it don’t seem that technically challenged at all," Mr Jeffery said.

"I’ve got absolute confidence in what they are doing and they’re doing a brilliant job."

Clip-on bridges hang out over Lake Dunstan where the rocks faces are too steep or tricky to build the trail.

They were the most time-consuming part of the job, but there was also a lot of rock retaining wall being put in place by hand, which was also very slow work, Mr Jeffery said.

"You have to secure the banks where they are exposed. In some places it’s a couple of metres high where they have cut in to create a trail."

Mr Jeffery said they had done more rock work than they had anticipated but the result was "stunning".

The most impressive new structure on the trail is a 85m swing bridge across a ravine.

It was lifted in by helicopter in pieces and has been stained to blend in with its surroundings.

The trust is liaising with the coastguard on how to "extract" cyclists from the trail in the event of an emergency, and helicopter "lift points" are also being identified.

However, Mr Jeffery said cyclists would need to be prepared to deal with such things as flat tyres without having to call for help.

There does appear to be full cellphone coverage along the trail for those using Spark but not for some other companies.

Mr Jeffery said he expected once the trail was in use, businesses would build up around it, providing such things as a ferry service for cyclists by road or by water.

"Those things will happen."

Generating new businesses was a goal the trust always had, he said.

The trail builders had not come across any archaeological sites, as they had done while building the Roxburgh Gorge trail.

The only building along the new route is a stone hut, the origins of which are being explored for signage being placed along the trail before the opening.

The trail is part of a $26 million, 536km network of trails connecting Queenstown, Cromwell and Wanaka to existing trails beginning at Clyde.

The next project will be forming the trail along the Kawarau Gorge, linking Cromwell and Queenstown.

A cycle trail on the Gibraltar side of the Cromwell gorge? Spectacular, but this trail is always going to need plenty of attention, not to mention (expensive) repairs.

Great to see this part of the trail nearing completion. This is a great asset for Central.

I wonder when the section at McNulty inlet near Cromwell will be done? This currently is the only piece between Smith's Way and Clyde that has not had any work done on it. On busy days there are boats, cars, walkers and cyclists all dodging each other. It wont be long before there are serious injuries here. Perhaps the Trust can let us know when they are going to spend a little bit more money and finish the job.