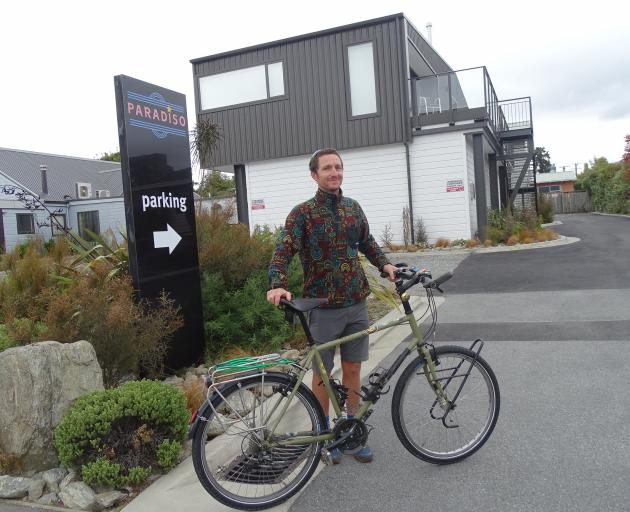 Paul Coleman, of England, was nearing the end of a two-year, round-the-world cycling tour when Wanaka became his home for four weeks. PHOTO: KERRIE WATERWORTH
Spending an unexpected four weeks in lockdown in Wanaka is placing one nomadic traveller at risk of "falling in love" with the town and wanting to stay.

On April 1, 37-year old Paul Coleman, originally from England, should have been celebrating two years of cycling around the world.

Mr Coleman has cycled between 40km-100km every day, depending on the terrain and weather, pitched a tent every night and every morning headed out into the great unknown. His travels have taken him through Europe, from France and Belgium to Croatia, Uzbekistan Tajikistan, Kurdistan, India, the United States and many more countries before New Zealand.

There were only a few times when his steel and expedition touring bike was not his mode of transport, one of the last being a flight from the United States to Auckland on January 3.

And there were only two times when he stayed in one place longer than a night or two.

Mr Coleman was on the outskirts of Haast when he heard about the lockdown.

"I went to the first campsite and when I spoke to the woman at reception ... she was closing and not taking anyone else.

"I cycled into Haast to get some food and there I met a couple from Germany on a tandem bike and the three of us stood around wondering what we were supposed to do.

"The Department of Conservation and all the holiday parks were closing their campsites, and here we were travelling by bike."

Mr Coleman checked various websites to find out if they were allowed to continue cycling around the country, but found no guidelines.

He cycled to Albert Town where he phoned a friend he knew from his years of working as a self-employed plumbing and heating engineer in Morzine, France, and who was now living in Arrowtown.

She suggested taking to social media as she was not in a position to put Mr Coleman up.

"I think most people on visas had decided to get out of the country, but even though I am a bit of a travelling nomad I decided to stay and sit this out."

Mr Coleman saw an offer of a room from the Wanaka Paradiso cinema manager Garrick Cameron — in his flat above the cinema — and cycled immediately to Wanaka.

"And here I am spending my four weeks here in Wanaka. Where could you find a better place to spend it?"

He said he had always wanted to come to New Zealand.

After two years on the road, Mr Coleman said he had reached the point of wanting to stay in one place and "do silly things" like own a toaster and a pair of jeans.

With almost no tourists, no traffic, and few people about, Wanaka was very appealing.

"I actually think I may fall in love with Wanaka in the time that I am here, but I know I am seeing it in a dormant, sombre mood," he said.

He said he was keen to experience the "true" Wanaka, particularly its cafes and restaurants, but he could not stay forever.

His trip around the world had followed the death of a close friend which had made him re-evaluate his life and realise that it "was not all about work".