Some were quicker than others at getting off the mark at the start of the 2.5km Ruby swim race. Photo: Sean Nugent
The weather may not have been picture-perfect, but that did not dampen the spirits of the hundreds of athletes who competed in The Ruby swim events on Saturday.

Six  events were on offer, ranging from a 200m dash for children up to a 10km marathon.

The feature swim, The Ruby, a 2.5km circuit from Waterfall Creek around Ruby Island, was won by Invercargill’s Jaxon Taylor, who snared first place in the dying stages of the race, blitzing ahead of Dunedin’s Stefannie Gillespie, to win by just seven seconds in a time of 33min 26sec. 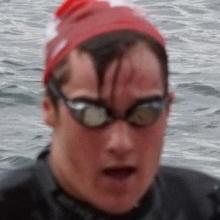 Jaxon Taylor
Taylor, a regular triathlete, was competing in the event for the first time, and said he did not know what to expect.

"I don’t usually do this long sort of stuff so I didn’t really know how to pace myself."

A packed field made the start a struggle for Taylor, who said he was "swamped" and nearly lost his cap.

But he pushed his way to the front of the field and from there was fighting against strong winds that lashed across the lake, most notably around the back of Ruby Island.

"It was quite choppy. It was actually quite nice going out and back in to shore, but round the back it was rough and you started to lose your stroke a bit," Taylor said.