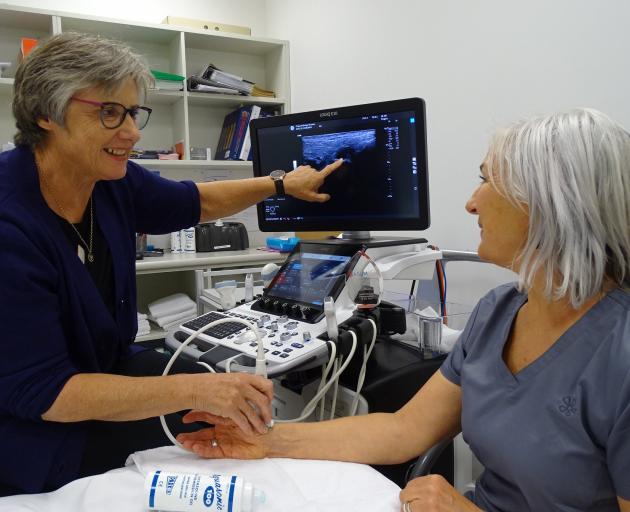 Wanaka sonographer Jill Muirhead demonstrates the latest ultrasound technology to radiographer Annie Campbell (right) at Pacific Radiology in Wanaka yesterday. PHOTO: KERRIE WATERWORTH
A Wanaka sonographer who has worked in ultrasound for more than 40 years has been given three separate honours in the past month.

Jill Muirhead (64) has been named Australasian sonographer of the year for 2020 by the Australasian Society for Ultrasound in Medicine, awarded an honorary fellowship of the Royal New Zealand College of General Practitioners for her work teaching ultrasound to rural and emergency doctors, and made an inaugural fellow of the Australasian Sonographers Association.

Mrs Muirhead began her career as a sonographer in 1979 when she was one of only two radiographers selected to train to operate Dunedin Hospital’s first ultrasound machine.

"It was really exciting and so fascinating, opening up the anatomy we had never visualised before."

A lot of the work was around pregnancy, looking at abdomens, liver tumours, gallstones in the gallbladder and obstructed kidneys, she said.

Forty years later, the resolution of the equipment was "really, really phenomenal now"; sonographers used colour to see blood flow and could use ultrasounds to look at musculoskeletal work, she said.

"We can see the first two centimetres of the body and the detail in ligaments and tendons which is an area I really love," she said.

For 14 years, Mrs Muirhead, together with her colleague Wendy Finnie, designed, developed and taught postgraduate papers in generalist ultrasound and echocardiography for rural and hospital doctors.

"The reward I have had from teaching rural doctors and emergency doctors has been enormous," she said.

"The learning that these doctors do is phenomenal. They are making diagnoses that other times would have taken much, much longer."

Breaking bad news was one of the hardest parts of the job, and it took time to get used to dealing with that, she said.

"Pregnancy ultrasound is a big part of what we do and coping with the patient’s loss is really, really difficult."

The best days were when she made an unexpected diagnosis.

"Guiding the referrer down the right track about what else needs to be done because they now have information about that patient which they did not have, I find that really satisfying."

She said there were also funny moments, such as when a husband came in to hold a wife’s hand during a procedure involving injections and ended up on the floor.

"It is always the guys who faint," she said.

There was at present a shortage of sonographers in New Zealand and worldwide, and if people liked the "challenge of ongoing learning and accomplishing new techniques", Mrs Muirhead would recommend it as a career.

"One of the things I love the most now is seeing the young radiographers coming through and developing the passion for the job that I have always had, upping their skills and getting the same thrills from making a diagnosis," she said.