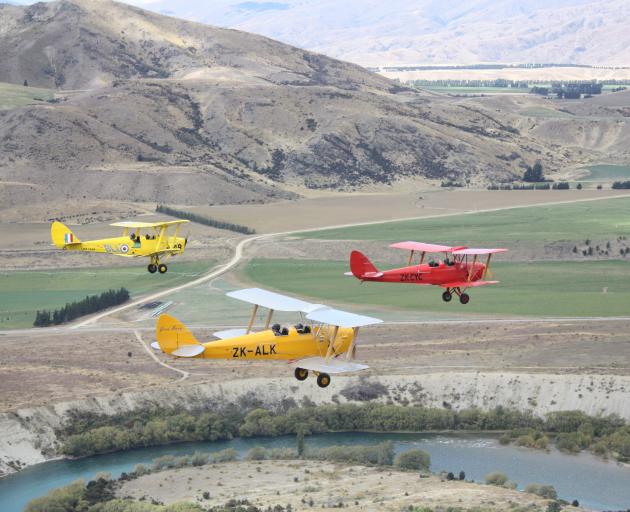 Three Tiger Moths fly in formation over the Clutha River south of Luggate, towards Bendigo and on to Alexandra after leaving Wanaka Airport yesterday afternoon. The planes are part of a group of vintage aircraft, mainly made up of Tiger Moths, on a flying safari of Otago and Southland. Photo by Tim Miller.
There is a chance, if you look to the skies over Southland and Otago in the next week, you might be able to catch a glimpse of aviation history.

A group of 12 vintage planes, made up mainly of Tiger Moths, will be flying around Otago and Southland during the next week as part of a safari.

The group, from the Tiger Moth Club of New Zealand, stopped for lunch at Wanaka Airport yesterday afternoon.

They had travelled from Omarama where the club had held its annual meeting at the weekend.

Secretary Graeme Wood said the safari would take in locations mainly in Otago and Southland but also the West Coast and the top of the South Island.

It was difficult to determine the number of Tiger Moths in New Zealand, as many were stored in sheds, but there were about 35 which flew, Mr Wood said.

After stopping in Wanaka for lunch, the group travelled to Alexandra where they spent the night before flying to Manapouri today.

High winds had meant flying conditions were not perfect but, overall, the weather had been good, Mr Wood said.

''I see we have big high pressure coming on now so we're looking forward to some good Otago settled weather.''

Most of the club's members were from the North Island but there were a few from the South Island also, he said.

So far, there had been no major issues concerning the planes, many of which were over 70 years old.

''We haven't had any mechanicals on the way besides some minor little issues, but we carry spares so it's been all good,.'' Mr Wood said.

After Manapouri, the group will fly to Gore and Mandeville before flying along the West Coast and on to the North Island.