0 Comments
Gale-force winds closed skifields yesterday, forcing families to get creative about how to enjoy their school holidays in Wanaka.

Arriving two days ago, Auckland teenagers Izzy Mullan and Lucy Nevill said they planned to spend the majority of their two weeks skiing up at local fields.

Due to the unexpected weather yesterday, they decided to take the opportunity to explore the town.

"We’re going to watch a movie, look at some of the shops and chill after that," Ms Mullan said.

Alongside cinemas being a wet day attraction, more than 300 visitors headed to the Wanaka Recreation Centre. 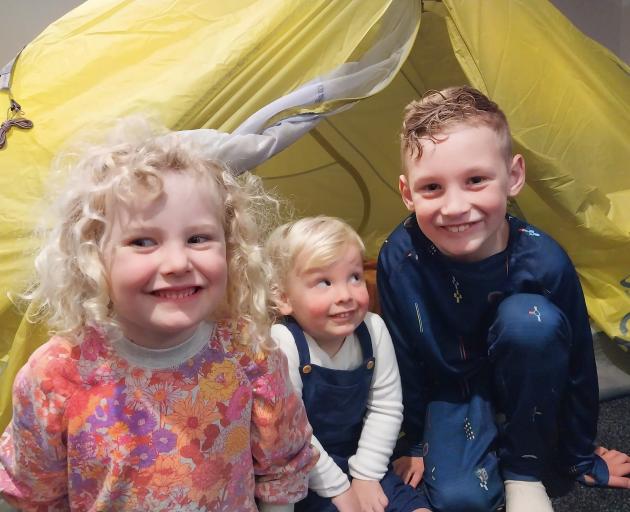 Visiting grandparents living in Wanaka, Lucy (4), Jesse (2) and David (7) Phipps, of the Hibiscus Coast, said they were excited to spend the rainy day "watching movies in their cosy tent" in their grandparents’ garage yesterday. PHOTO: ASPEN BRUCE

Dunedin locals Kim Bailey and Harper McLay said they would spend the afternoon shooting hoops at the Centre.

"We had planned to go skiing. We’ve got season passes, so we hope to be able to head up there sometime this week," Ms Bailey said.

"We’ve had around 1000 people come through," the spokesperson said.

For some visiting families with younger children, keeping the kids entertained in the wet weather took on a creative approach.

Down visiting family in Wanaka, the Phipps family from the Hibiscus Coast said normally on a rainy day they would have a couple of pre-planned inside activities.

"Baking’s a good one. The kids enjoyed doing that this morning. They also made an obstacle course, which has helped with burning off energy. We have also been embracing the rain and getting on the wet weather gear and going outside," Mrs Phipps said.

David Phipps said a highlight of the day had been converting the garage into a single tent campground.

"We cleared the garage and played some balloon soccer, then our Pappa set up this tent and we set it up to play inside," he said.

His younger sister, Lucy, said she was excited to sleep in their indoor tent for the night — "if Mum let’s us".

The siblings planned to spend the afternoon watching movies and playing games in the tent.

Weather conditions varied with strong north westerlies, heavy rain and thunder and lightning throughout the day.