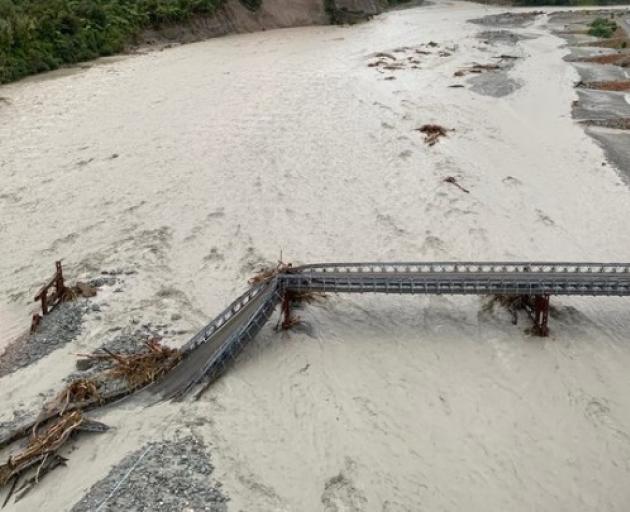 The Waiho Bridge was washed away in floodwaters in late March. Photo: Doc
Unprecented demand for heavy rock for flood works has left contractors scouring the riverbed at Franz Josef Glacier and the West Coast Regional Council is considering opening up new quarries in a World Heritage area, seven years after the government declared it closed to new quarrying.

The West Coast Regional Council, which has the licence for the Whataroa quarry, said with the NZ Transport Agency shoring up bridge abutments, the Department of Conservation reopening the access roads to the glacier, and a new stopbank under way on the Waiho Flat, the demand stretched to 180,000 tonnes of rock.

By contrast, the entire Hokitika seawall was 38,000 tonnes.

Regional council chief executive Mike Meehan said the Whataroa quarry could not keep up with demand. A stockpile of up to 30,000 tonnes had gone almost immediately.

"We are looking at a couple of sites to potentially open up," Mr Meehan said. "We are working with Doc."

If they progressed, it would take time to open up new quarries, but it was looking at a site in Whataroa, and around Fox and Franz Josef.

In 2012, then prime minister John Key ruled out all mining, including quarrying, in the South-West NZ World Heritage area, from Whataroa south to the Fiordland coast.

"I can give you an assurance we won't be mining on World Heritage sites," Mr Key said at the time, under pressure from conservationists.

Mr Meehan said Doc was currently taking the rock it needed from the riverbed.

Council contractors were also now digging in the Waiho (Waiau) River bed, but the council did not want to use more than 30% of river-run rock.

After more than a month, between 4000 and 5000 tonnes of rock had been recovered so far.

Mr Meehan said the council would also look at whether it should increase stockpiles in future.

However, he acknowledged the March 26 flood had created "unprecedented" demand.