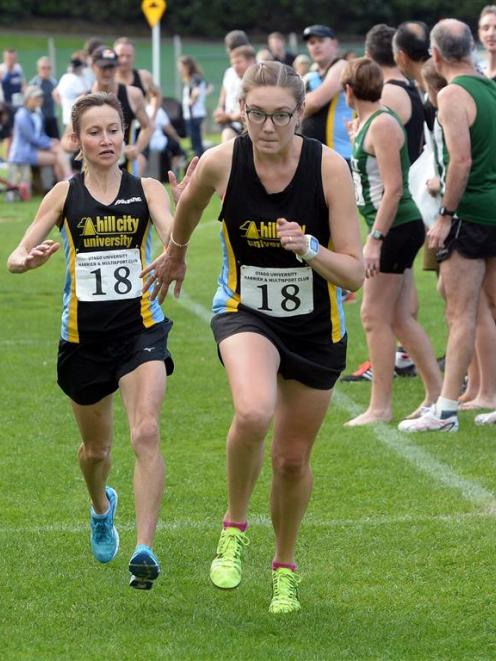 The event was first held in 1937 to honour the 1500m gold medal won by Jack Lovelock at the 1936 Berlin Olympic Games, with each team member running 1500m.

Teams of six contest the senior men's title and teams of four the senior women's.

Monk showed all the skills that won him the Otago 1500m earlier this year, handing his team a valuable five-seconds lead at the first change.

Madgwick, Ogle and Chignell then ran superbly to extend this to 10 seconds, despite Sam Hopper (Caversham) vying for the lead with Chignell over the middle stages of the fourth leg.

An extra gear or dogged determination, it was to prove a great captain's knock from Chignell, who pulled away from the duathlon international over the final stages to set up Sam Bremer.

It was a lead Bremer, a national 800m silver medallist in March, embraced and he extended the lead to 40 seconds for the final change to Shields, who brought the team home to victory in 25min 22sec - 58 seconds clear of Caversham.

The Hill City and University of Otago clubs amalgamated five years ago and Saturday's victory on Saturday marked a turnaround in the fortunes of the two former clubs.

Hill City last lifted the senior men's trophy in 1993 and University won it in 1988.

Chignell was full of praise for Monk, who handed the team its lead right from the start, which he said was quite unexpected given the pedigree of the runners he was up against.

"We've got a lot more depth this year,'' Chignell said of his club's performance.

The change of venue from the University Oval to the No 2 ground for the second time this century - due to ground modification work at the Oval Ground - appeared to have little effect on the athletes.

Bremer clocked fastest time for the 1500m of 4min 5sec and Shields was second fastest with 4min 9sec.

But it has been the evergreen Crumpton, Bloomfield and O'Sullivan who played a major role in teams from the Hill City-University Club lifting the trophy for a sixth consecutive time.

Before the Hill City-University merger, the two clubs had maintained a grip on the trophy since 2003.

O'Sullivan, making her comeback after a two-year absence, clocked the second fastest time of 5min 15sec, with team-mate Kozyniak fastest with 4min 51sec.