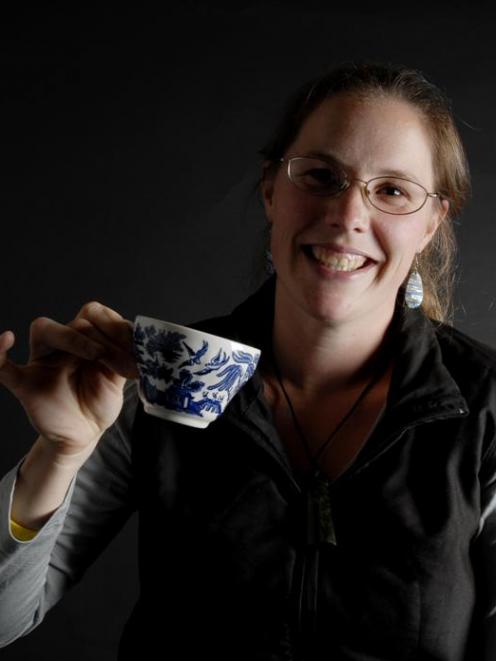 Lifting anything more than a tea cup is out for injured Otago hammer thrower Debbie McCaw. Photo by Gregor Richardson.
Otago Olympic hopeful Debbie McCaw has been struck a double blow in her bid to make the New Zealand team for the 2012 games in London.

"I'm not allowed to lift anything heavier than a cup of tea" she told the Otago Daily Times yesterday while waiting for an appointment with a specialist. The women's hammer weighs 4kg.

As well as the injury, McCaw has been declined a visa to work in Britain where she planned to compete at a high level.

McCaw said there was no shortage of work in London for occupational therapists, such as herself, and her visa problems were probably due to immigration "nitpicking" because of the recession.

On Saturday, the ODT reported North Otago shearer Graham Johnson had also had problems obtaining a visa, despite Britain's shortage of shearers, and would now not be going.

McCaw's application, in January, for a "highly skilled migrant" visa was turned down, she believes, because of a lack of clarity in the British High Commission's online application form.

She was required to supply at least two pieces of evidence about her earnings in Britain during previous visits. She supplied three sets of documents - payslips, a letter from her employer and bank statements.

"Unfortunately, I was told that the payslips and letter from my employer were considered the same, as they were from the same source."

McCaw believed the online application form current at that time listed these as separate sources.

The other documents - print-outs of her British internet bank account - were considered unacceptable "even though that was the only way my bank provided statements for me".

A spokesman for the British High Commission in Wellington said yesterday people "really need to read the information carefully" on application forms.

"If people don't supply what is listed, the application gets refused."

"Basically, any correspondence from banks or anything like that . . . has to be on company letterhead and signed and dated."

There was now "no room for local interpretation" and the same rules applied in New Zealand as applied "in an area where, maybe, forgery is more prevalent".

To add to McCaw's woes, after her application was declined, the rules for visa applications changed.

Instead of her bachelors degree being sufficient for a highly skilled visa, she now needs a masters degree to qualify.

In the year to February, 770 highly skilled visas were issued in New Zealand.

"Only a minority" of those recipients had a masters degree, and in future seven out of every eight applicants could be affected by the new rule.

McCaw's unsuccessful application was accompanied by a non-refundable payment of $1627. As well, she paid for a flight to Christchurch and a night's accommodation, for a "five minute appointment" to have a digital photo and digital fingerprints taken.

In a letter to the ODT, McCaw said she struggled to find top-class hammer throw competition in New Zealand and had intended training and competing in London to "hopefully increase my chances" of qualifying for the Olympics.

"This now seems almost impossible if I am unable to return to the United Kingdom."