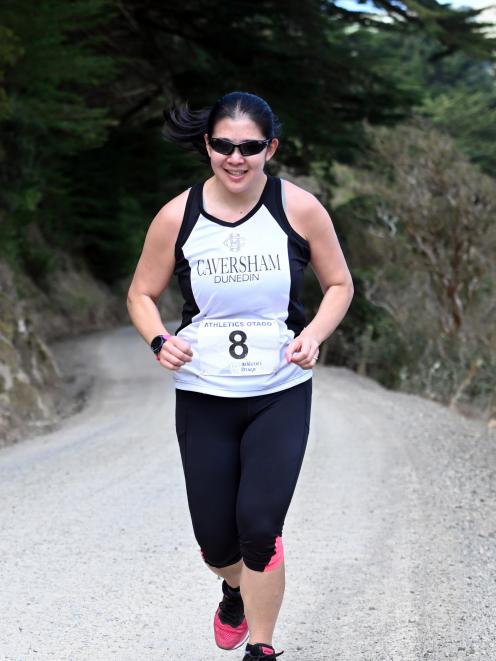 Cavy Dolphins team member Celia Lie contests the second leg of the Peninsula Relay on Saturday, involving a 3.2km climb up Hoopers Inlet and Sandymount roads to Highcliff. Lie recorded 25min 22sec to help set her team up for an eventual third place. Photo: Linda Robertson
Seventy years of history did little to shine a positive light on the annual Peninsula Relay on Saturday.

Athletics Otago's cross-country committee put the onus on entrants to estimate their finishing times and be handicapped accordingly.

That turned the once proud inter-club road relay into somewhat of a Keystone Cops affair, and the winner was not decided until the seventh team to finish crossed the line.

The first six were either disqualified because they fell outside the margin of the 4% error on their estimated time, or they were one of the three social teams competing.

O'Sullivan, in her first inter-club event for the season, complimented the hard work of Pakeho, Craigie, Dickinson and Scott, to put the team in the lead.

That handed Allnutt a 30-second lead over the second-placed Civil Service.

It set up what proved an epic race on the 7km final leg between Cape Saunders and Portobello Domain.

Running the sixth and final leg to Portobello for the Civil Service team was Peter Frew, while contesting the final leg for the Hill City women's team was Allnutt.

Frew initially came back within a 50m of Allnutt around Papanui Inlet, but up Weir Rd Allnutt gradually extended her lead to a 200m advantage on the sealed section into the finish.

After a blistering run on the final stage, Otago Half Marathon champion Nic Bathgate crossed 10 seconds for the Leith Senior Men's team, to lay claim to third.

But it all counted for little.

Both the Hill City women and the Leith senior men teams were disqualified for finishing outside a 4% time threshold.

The Civil Service result was overlooked as they had entered as a social team.

In a touch of irony fastest time honours went to the disqualified Leith senior men's team, which completed the six-leg 29.5km course in 1hr 47min 46sec.

Past Athletics New Zealand president and now patron and life member of Athletics Otago Ron Cain contested the third leg on the original course of the Peninsula Relay when it was first held in 1950.

He said that the end result on Saturday was a mess that needed to be sorted in order for the event to survive.

''In this day and age it does little to encourage people into the sport,'' he said, adding that it had always been an event to build team and club moral, while promoting positive inter-club competition.

Members of Athletics Otago's cross-country committee spoken to said that the system was introduced in order to have honest times submitted for handicapping.