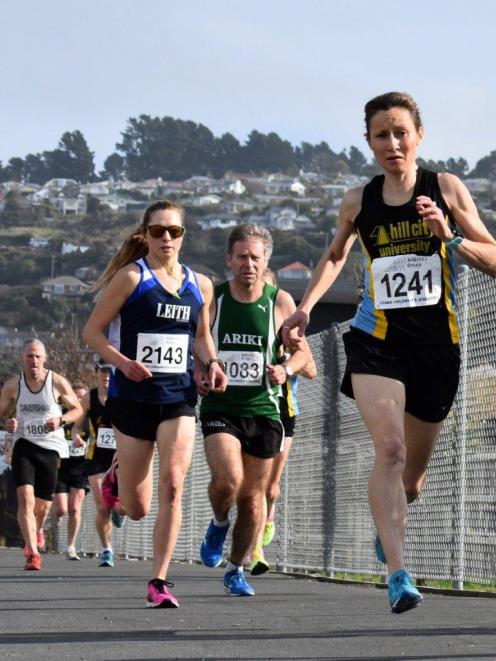 Shireen Crumpton (Hill City-University) and Sharon Lequeux (Leith) power their way through the masters men’s field during the 10km Otago Road Championships at Forbury on Saturday. Crumpton won the senior women’s title in 39min 13sec and Lequeux finished fourth in 41min 26sec.
Stafford Thompson (Hill City-University) wrapped up a season of firsts when he secured the senior men’s 10km title at the Otago Road Championships on Saturday.

Until this year, Thompson (37), a Dunedin physiotherapist, despite numerous other successes, had never won an Otago road or cross-country title.

When he lifted the Otago senior men’s 10km road crown on Saturday, he locked away the road and cross-country double for 2017.

Added to his harrier season double-act were a sixth Three Peaks Mountain Challenge title and victory in the 115-year-old Port Chalmers to Dunedin road race.

But Saturday’s road title almost became the one that got away, because of inconsistent training over recent weeks, due to work and family commitments.

Thompson attempted to dictate terms from the start but became embroiled in a titanic battle with Jason Palmer (Leith).

They matched each other stride for stride over the first 8km, until Thompson decided to give the title his best shot over the final 2km.

The gamble had an immediate effect, and he gradually began to pull away from a relentless Palmer.

"I’m very happy with that," Thompson said at the finish.

"Jason and I had a really good race together. He’s such a strong runner, has a really good rhythm and a good, even pace, which made for a good, honest race."

Thompson was pleased to have the sharpening the race offered, as part of his preparation for either the Dunedin or Queenstown marathons in coming weeks.

He will then turn his attention to the Oceania Masters Track and Field Championships, which will be held in Dunedin in January.

A fractured toe may have kept Shireen Crumpton (Hill City-University) out of racing over the winter, but on Saturday she returned to competition with a vengeance, winning the senior women’s title in 39min 13sec.

"I’ve just been back running five weeks. So I thought I better have a hit out," she said.

She was eyeing the Noumea Marathon next Saturday, an event she has won three times.

"It’s a slow progression, getting back to full fitness. But I’ve just been building up slowly."

While Crumpton turned it into one-way traffic at the head of the women’s field, a battle royal for the minor places took place between Hill City-University club mates Bella Bloomfield and Bridget Thompson, and Sharon Lequeux (Leith). Bloomfield had locked in second place midway through the 10km race. Lequeux was looking assured in third, only to be overtaken by a fast-finishing Thompson in the final 400m. Bloomfield clocked 40min 12sec and Thompson 41min 18sec.

Clyde to Alexandra road race canned due to Covid