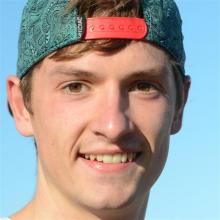 The Hill City-University (HCU) runner was the best of the Otago contingent, but was edged in the feature race at the Lovelock Classic on Saturday.

He ran a 4min 17.57sec to lead a very tight chasing group in the Lovelock Mile.

But it was 17-year-old Chanel Muir, of Christchurch Avon, who went home $600 richer. He crossed the line in 4min 15.15sec to win the title for the first time.

Baan’s second was not Otago’s only placing of the day.

HCU’s Rosie Elliott continued her brilliant summer by clocking wins in both the 100m and 200m.

In the 200m she backed that up by finishing in 23.92sec, nearly 1sec ahead of Morrison.

Taieri’s Felix McDonald also claimed a win in what was an Otago-dominated men’s long jump competition.

He ran 11.07sec and 21.80sec respectively, but was beaten by Old Boys United’s Tiaan Whelpton in both.

Paralympian Anna Grimaldi (HCU) made her return to competition for the first time since winning silver at the para-world championships.

She jumped 5.42m for third in the open women’s long jump.