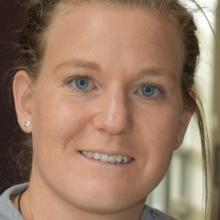 Rozie Robinson.
Rozie Robinson took another step forward  to next year’s world championships in China  yesterday when she won the open women’s walk  in the half marathon section of the Cadbury Dunedin Marathon.

Since establishing a course record in 2011, when she race-walked the half marathon in 1hr 59min 43sec, Robinson (26) has been troubled with cartilage  problems in her knees, requiring surgical intervention.

"It was making locking unbearable," she said, speaking of her second operation 18 months ago, adding that her pathway to full recovery has been long and character-building.

Now coached by three-time Olympian and 2002 Commonwealth Games silver medallist Craig Barrett, Robinson could not be in better hands in regard to strength, conditioning and focus. Robinson, ranked second in New Zealand behind Olympian Alanah Barber, noticed that her  perseverance and desire to return to the top echelon was finally beginning to pay off, clocking a personal best of 1hr 43min 21sec for the 20km road walk at the national track and field championships in Hamilton in March this year.

This bettered her previous mark by 2min and the time was  close to the world championship qualifying mark of 1hr 40min.

"That was only with about two months of 20km training," she said.

"I’m into building and mileage, hoping that the summer season will bring even better results."

Robinson makes no secret of the fact she is not on the start line at events  just to make up the numbers, with  a renewed determination and focus on  personal bests and records, striding through yesterday’s half marathon in 1hr 56min 44sec.

She used  the  event as an indicator on where she is at in  building towards the long-distance championships on the Caroline Bay course in Timaru next month. After  that, she and  Barrett will assess the two races and fine-tune her training schedule, before hitting what will be busy summer season of racing, beginning with a 20km invitational race in Melbourne in early December.

Robinson said that Melbourne event will be the one she  would target to crack the world championship qualifying mark.

But with the Commonwealth Games qualifying mark the same as the Olympic qualifying mark of 1hr 30min, Robinson believes reaching the world championship qualifying mark is a more realistic goal for her at this stage, and  considers it well within her grasp.New Zealand under-18 champion Alex Brown won the associated quarter marathon walk in 1hr 8min 13sec.