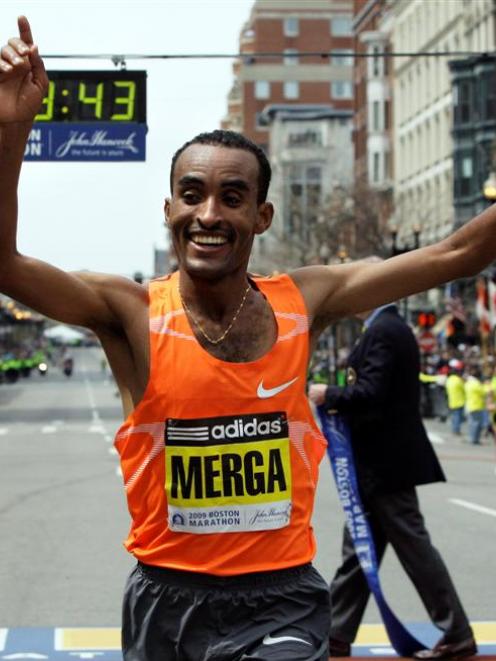 Mens winner Deriba Merga of Ethiopia reacts at the finish line in Boston at the 113th running of the Boston Marathon. Photo Elise Amendola/AP.
An Ethiopian broke the Kenyan dominance of the Boston Marathon, the women raced to their closest finish ever and two third-place finishes signalled the long American absence from marathoning's elite could be near an end.

Ethiopia's Deriba Merga pulled away before Heartbreak Hill on Monday and won in 2 hours, 8 minutes and 42 seconds, almost a full minute ahead of Kenya's Daniel Rono.

Merga's win was just the third time in 19 years that a Kenyan failed to win, and was redemption for an Olympics fade in Beijing that saw him go from first to fourth in the last quarter mile.

"Boston is one of the biggest marathons in the world," Merga said. "Because of that, our people are very happy."

Kenya's winner this year came in the women's race, when Salina Kosgei outsprinted defending champion Dire Tune of Ethiopia to beat her by less than a stride, in 2:32:16.

Tune was on the other end of a dash to finish last year when she edged Alevtina Biktimirova by 2 seconds in what was then the race's closest-ever finish.

American Kara Goucher led the trio at the start of the last mile on Monday, but couldn't keep pace on the final sprint and finished 9 seconds back.

Goucher couldn't hide her tears and disappointment after the race, though the third-place finishes by her and Ryan Hall on Monday were the best American showing since 1985, when Lisa Larsen-Weidenbach led a top-three sweep in the women's race and the men came in second and third.

"The bar's continuing to get raised, and I think it's time for Americans to step up and meet the challenge," Hall said.

Signs reading "Go Kara!" and chants of "U.S.A.!" followed Goucher as she tried to hold off Kosgei and Tune.

"Two Americans in the top three is fantastic," Goucher said. "I think once things settle in a bit, it'll be a really great day, we'll be really proud of this."

The women's race was the slowest since 1985, setting off at a 6:28 pace and finishing so close to the men's race that Merga crossed the finish line before Kosgei, who had a half-hour head start, had a chance to climb the champion's podium.

"I was a little bit embarrassed," said eighth-place finisher Colleen De Reuck, a 45-year-old four-time Olympian and naturalized US citizen who grabbed the lead at several points out of frustration.

"You come to a marathon - and a big marathon like this - you get paid a lot of money to come and run and I think you should race."

But the pack split when Goucher made a move five miles from the finish.

"I looked around in the last five miles and felt like there were too many people there," she said. "I just felt great when I started to press, and the whole time I felt like I had another gear and, I don't know, they had more."

Kosgei said the weather, including a stiff headwind, made the challenging course even more difficult.

Tune collapsed after crossing the finish line and was taken to the hospital, though race organizers said it was a precaution.

Defending champion Robert Cheruiyot, who was seeking an unprecedented fourth straight title and fifth overall, dropped out of the race between the 35K and 40K markers and was also taken to a hospital.

Merga said he was aware Cheruiyot was pushing him at about the 30K mark.

"After that he did not come," Merga said. "(I thought), maybe this day is not for him."

Merga said he was confident he could win from the start. And unlike the Olympics, he said, he wasn't derailed by stomach problems.

A field of 26,386 runners left Hopkinton in on a windy morning with temperatures in the 40s.

Hundreds of thousands lined the 26-mile, 385-yard course that winds up and down through seven suburbs before ending in Boston's Back Bay.