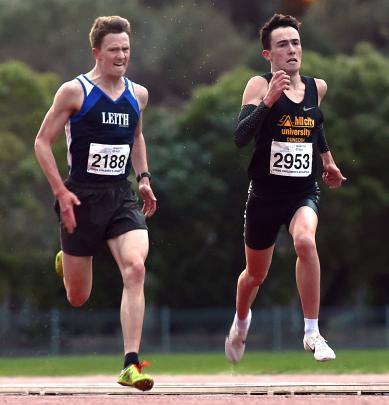 Oli Chignell (right) reaches the finish line ahead of Janus Staufenberg at the Otago 3000m track challenge at the Caledonian Ground last night. PHOTO: PETER MCINTOSH
It was a very early - and chilly - start to the Otago track season last night.

The inaugural event took place to mark the 150th anniversary celebrations of the University of Otago.

Athletics and the university have not always been great bedfellows - not that it is the fault of either side.

Athletics is a summer sport, and for the vast part of the warmer months most students are not in Dunedin.

They used to turn out in good numbers, but over the past few years with job commitments and other pursuits taking over, student numbers competing have dropped away. It is not only athletics which is experiencing the drop in numbers and like other sports, athletics has been trying to turn the tide.

The race, which also included non-students, was held at the end of the winter running season but before the summer athletics season begins, and also when students were still in town.

The challenge was split into two fields and attracted just over 30 runners.

It is also hoped some sort of athletics event can be organised for March, when students return for another year.

That may be a relay or a contest between university halls early next year when the academic year gets under way.

Rebekah Greene was the quickest woman home in just under 10 minutes.