Phil Morris, of Hill City-University, leads off the field in the Ness Cup handicap mile at the Caledonian Ground on Saturday. Photos: Linda Robertson
Youth shone in one of Otago's most historic races on Saturday.

A trio in their early teens all crossed first in the Ness Cup mile handicap race at the Caledonian Ground. 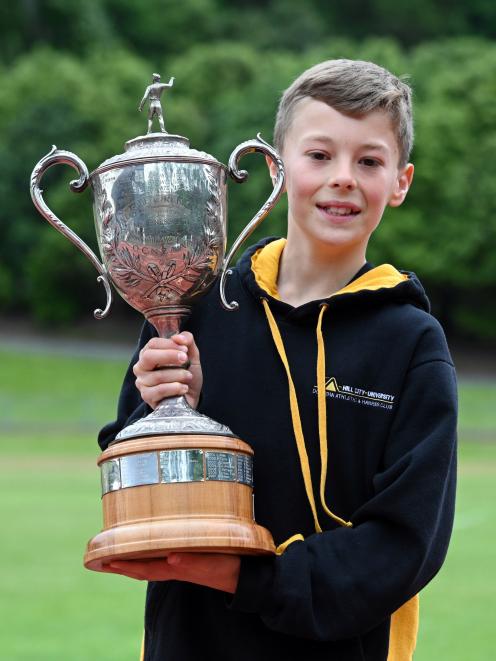 It was an impressive run from the young trio, who took the lead from front-marker Philip Morris after 600m.

Collard (13) and Carswell (14), who started together, ran down Morris and remained together for the majority of the race.

Bolter followed, although he could not pull in the leading duo.

Collard broke away with 200m left and claimed first place in a handicap time of 5min 59.72sec, 3.5sec ahead of Carswell.

Bolter finished third, holding off a strong finish from Caversham's Ben Pigou, who came charging down the home straight 3sec back.

Dyani Shepherd-Oates also had another strong outing in the hammer circle with a throw of 47.43m.

Beattie also won the women's discus with a distance of 37.92m.

Rosie Elliott was the fastest woman in both sprints in times of 12.16sec and 24.43sec.

Clyde to Alexandra road race canned due to Covid