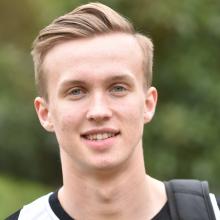 The 22-year-old swingman rolled his ankle during training on Monday.

He stepped on the foot of a team-mate during a spirited session.

Funny that, because metaphorically speaking the Nuggets’ defence did a bit of that during their season-opener against the Wellington Saints last weekend.

It was the franchise’s first home game in seven years and coach Brent Matehaere felt his side played within itself.

The attack did not gel as he hoped and defensively it struggled. Dion Prewster was able to roll around screens and get to the hoop way too easily.

He popped in a game-high 31 points to help his side record a very comfortable 95-73 win.

The game tape was hard viewing but worth the watch for the lessons garnered.

"There are obviously some areas we want to address."

"Our communication and understanding of what we were trying to achieve defensively [was not where it needed to be]."

"Dion Prewster was able to get down hill on us a number of times and he created some issues for our guards.

"We weren’t disciplined enough to keep our hands up and stay out of foul trouble."

The other area to get an overhaul this week was the offensive connections.

Australian import Geremy McKay landed a three-pointer with his first shot in the Nuggets’ singlet. The rest of the night was a bit grim, although he hustled hard

"Geremy was doing all the right things, he just didn’t finish. But he is working really hard and we’re impressed with his work ethic.

"Scoring wasn’t the main plan we had for our second import. We want Kiwis to be stepping up and filling that role."

Aitcheson was one player who did that.

He bagged 14 points but has been resting up since picking up a sprained ankle.

He is a chance of playing and Matehaere will make the call as late as possible.

Guard Matt Bardsley is still on the injury list. He has been sidelined with a rolled ankle as well and is "a week or so" away from making a return.

"[Aitcheson] should bounce back. We are hoping he can make it this weekend but, if he doesn’t, we’ll look to one of our development players."

Taranaki should pose fewer questions than the Saints. The Mountainairs’ roster does not have the same depth.

He top scored for Taranaki with 23 points during the 78-76 loss to the Southland Sharks in Invercargill on Thursday.

The Sharks hit a late basket to claim the win. They had led by 20 and were perhaps guilty of cruising.

But it was still a deflating loss for Taranaki and that will be on the team’s mind tonight.

Tai Wynyard is another threat. He collected nine rebounds — six of them offensive boards.

Guard Haize Walker drilled four three-pointers in a 15 point haul, so he is another the Nuggets will need to shut down.

The game starts at the Edgar Centre at 7.30pm.