By Jeff Cheshire
0 Comments
Finals are often decided in the big moments.

On Saturday night, the Otago Nuggets executed in the biggest moments of all.

They closed out a thriller in Auckland to to claim their first National Basketball League title.

A Jordan Ngatai block with 30 seconds to go provided the key moment as they beat the Manawatu Jets 79-77.

The win completed a remarkable comeback for a team which had not played a game since 2014. 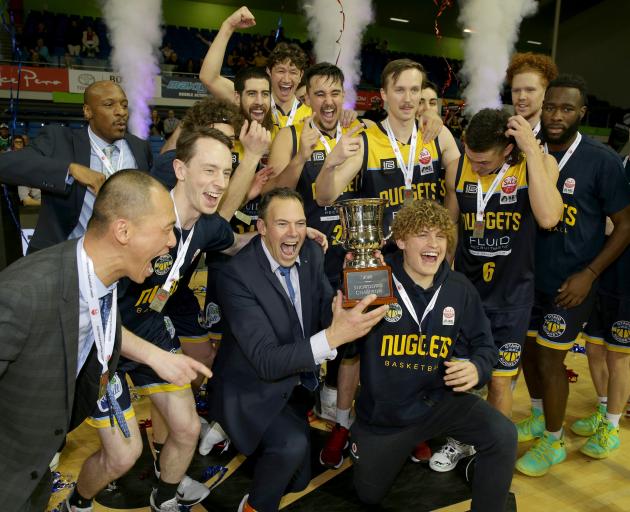 The Otago Nuggets celebrate with the NBL trophy after beating the Manawatu Jets in Saturday’s final in Auckland. PHOTOS: GETTY IMAGES

It was tight and it was tense.

The Nuggets trailed for most of the first half, but held a narrow lead throughout the fourth quarter.

Finals most valuable player Jordan Hunt, who top-scored with 21 points, helped stretch that gap to eight.

However, the Jets came firing back. 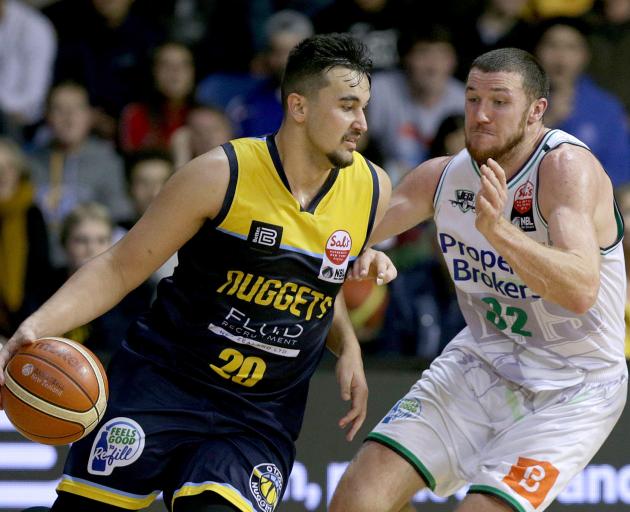 Otago Nuggets forward Kane Keil looks to drive past Manawatu Jets forward Tom Vodanovich during the NBL final in Auckland on Saturday.
Trailing by one with 30 seconds left, Hyrum Harris looked to have a lay-up to put the side ahead.

But Ngatai came from nowhere to block his shot, before Josh Aitcheson went to the line to hit the final free throw.

"Just so good that we managed to hang tough and score in bunches at the right times.

"The way we came back out in the second half and got a little run at the start of the fourth.

"I felt even when we had those leads, we were in a better position than they were in that type of game.

"Points on the board, in tough matches that’s what counts.

"It was a real physical battle out there and the guys came out with real mana and made it count when they needed to."

While the side had two stars in Ngatai and Jarrod Kenny, it was its depth that was equally key.

The quartet of Hunt, Aitcheson (16 points), Kane Keil (15 points) and Richie Rodger (eight points) was influential, especially with Ngatai in foul trouble for much of the first half.

The Nuggets struggled to get their offence going early and turnovers — 14 before halftime — plagued their game.

That was not helped when Ngatai picked up his second foul late in the first quarter.

Matehaere opted to be cautious with him.

He did not play the second quarter, but the Nuggets’ grit on defence allowed them to stay in touch, trailing 41-37 at halftime.

A run to start the third sparked the side, Hunt and Keil both scoring big baskets.

But the Jets hit back again, notably through outstanding forward Tom Vodanovich (24 points). They took a 55-52 lead to the final break.

Again, though, the Nuggets started the quarter well.

They went on an 11-1 run, as Kenny pushed in transition and Hunt and Aitcheson came up with important plays.

Harris and Vodanovich helped pull the Jets back.But a pair of dunks to Ngatai down the stretch, followed by his block helped the Nuggets close out a thriller.