By Jeff Cheshire
0 Comments
On Saturday, they won it.

On Sunday, they brought it home.

The Otago Nuggets landed at Dunedin Airport yesterday afternoon, following their 79-77 win over the Manawatu Jets in Auckland to claim their first National Basketball League title.

Josh Aitcheson emerged from the arrivals gate clutching the trophy, leading the team into a small welcoming gathering.

One of six Otago locals in the team, Aitcheson said it was "pretty cool" to bring the trophy home.

The 22-year-old had waited in Dunedin for the side get back up and running — it last played in 2014 — something that made the victory all the more special.

"It was pretty overwhelming when it happened," he said.

"Especially since it’s been a pretty big build-up.

"A lot of us have been waiting for the Nuggets to get back for a long time.

"It’s pretty awesome the year they get back for us to win it." 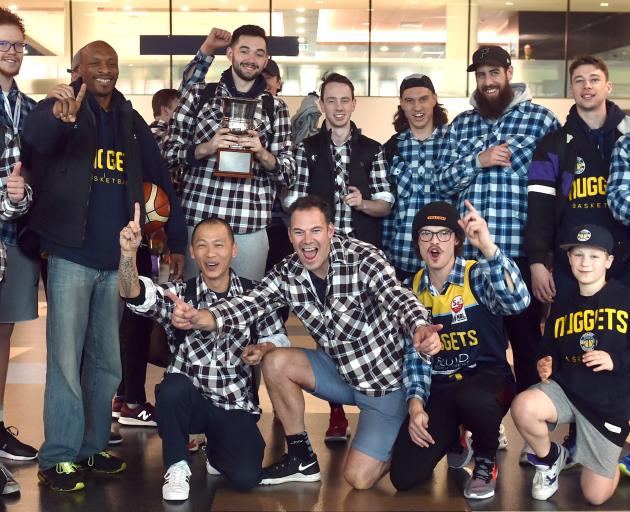 The victorious Otago Nuggets arrive back home in Dunedin yesterday. Photo: Peter McIntosh
It was not just the Otago players that returned.

The entire team made the journey south, despite having been away from home while living in Auckland for the past six weeks.

That included Tall Black duo Jarrod Kenny and Jordan Ngatai, both of whom had been influential throughout the campaign.

Kenny said the desire to come was a result of the bond the team had developed.

"Whether we won or lost we wanted to come down together and thank the Dunedin community for all the work they’ve done over the last five or six years to get back into the league."

He added the welcoming at the airport had been great.

"It was a bit unexpected, but I guess that’s the great thing about smaller communities, that they get out and support.

"Just little things like that make you feel like you belong and they’re proud of you and they appreciate what you do and how you represent them."

His mullet has been a talking point and, after a pre-tournament promise that it would be cut in the Octagon if the team won, he confirmed plans were being made for that to happen.

Both Ngatai and finals most valuable player Jordan Hunt added the support for the team had been fantastic.

They said it was great seeing fans fly up to Auckland to watch, while the support from the South had been reaching the team.

Now they were returning the favour.

It was Hunt’s first time in Dunedin and he is looking forward to seeing the city.

Ngatai had not been down for 10 years and was equally excited to visit.