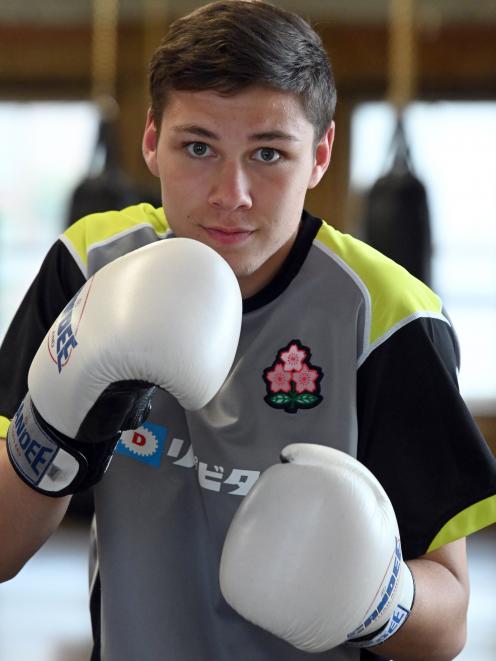 Dunedin boxer Awatea Henry gets in some training at New Zealand Fight and Fitness earlier this week.PHOTO: LINDA ROBERTSON
Awatea Henry has a big fight today and no game plan.

It is not through a lack of preparation. The 17-year-old has been training hard.

It is just he is not quite sure who his opponent will be and that makes planning tricky.

But it is a big opportunity. The Dunedin boxer will be representing New Zealand in a tri-nations tournament involving Australia and Samoa.

He is fighting the Australian No 1 in the 69kg youth division in Auckland, then attending a training camp the next day.

"I just have to stay ready and keep training the same," Henry responded when asked how he goes about preparing for the unknown.

"But it has been similar throughout the year. Most of the time I don't know who I'm fighting."

Henry did try to look up who he might be fighting but "there [are] about seven people who it could be", he shrugged.

The teenager is well-versed at going into a fight without a solid plan. He has had 51 fights and it has not been unusual for him to show up at an event unsure whether there would be a suitable opponent.

He has ended up taking fights against older or more experienced opponents. That has meant he has had to adapt quickly in the ring.

"Fighting older people has definitely helped me. And I gained a lot of experience which is useful now that I'm fighting people my own age."

Whoever he faces, Henry will be confident. He has really stepped up this year and is undefeated in eight fights.

Henry leans on his jab to help wear opponents down and his power punch is typically an uppercut. But he likes to throw combinations and keep the pressure on his opponents.

The young man has lofty goals. He hopes to represent his country at the youth world championships next year and would love to go the 2024 Olympics in Paris.

He is also eyeing a professional career.

Today's fight is another small step on that path.