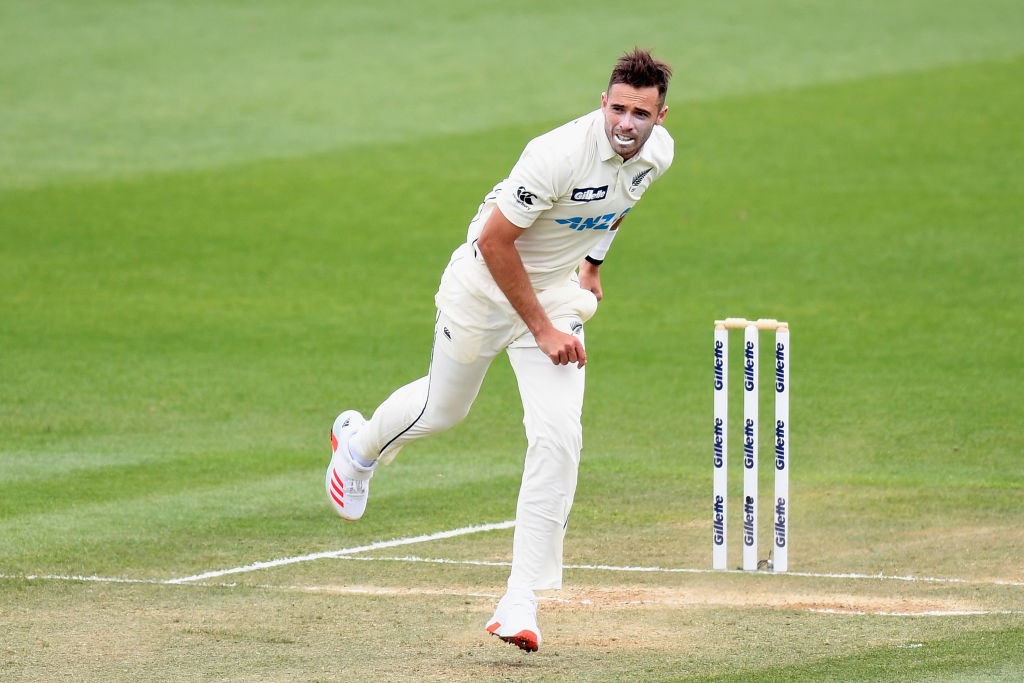 Tim Southee. File photo: Getty Images
When there's a Will, a Tom, and a Tim, there's a way.

Stellar showings from Will Young, Tom Latham and Tim Southee have seen the Black Caps storm back into the first cricket test against India, flipping the script from an unconvincing opening day to sit in a promising position at the conclusion of day two in Kanpur.

Southee started the sensational day's play with a stunning spell of bowling, picking up a five-wicket bag as India's batsmen crumbled, before Young and Latham continued the day of dominance, reaching stumps at 129-0, trailing by 216 runs.

It's hard to pick which was more impressive.

Significant opening stands are rather hard to come by in India – this is already New Zealand's third-highest opening partnership in the country - but, despite that, Southee's turnaround was staggering, given how his opening day ended.

Yes, a Tim Southee five-wicket bag is hardly the stuff of legends – today's collection was his 13th 'five-fa' in tests – but when he hobbled off with a groin complaint on day one, unable to complete his over, odds would have been more favourable on him not taking another wicket on tour.

Instead, he came out on day two and simply picked up four more to put the Black Caps right back in the test.

Using all the skills and guile that comes with having played 80 tests, Southee made precise and calculated incisions into the Indian middle order.

Ravindra Jadeja was his first victim, inside edging a delivery that angled back in on to his stumps, and by moving the ball in both directions, scrambling the seam and changing his crease position, the Indian batsmen rarely saw a repetitive over.

Perhaps most remarkably, Southee bowled 11 consecutive overs in the toxic Kanpur smog to start the day – not bad for someone who was on the physio table mere 20 hours earlier.

His figures – 11-3-26-4 – saw him finish with 5-69, and steal the mantle of biggest threat away from Kyle Jamieson, who followed a brilliant opening day with an off-key second, being slapped for five boundaries by Iyer, who brought up a debut century before Southee ended his innings on 105.

Southee had support from Ajaz Patel though. With only three bowlers required in the morning, Patel showed much better accuracy than his poor day one, and after the first eight wickets fell to seamers, spin finally struck in the 110th over, and again in the 112th as Patel ended India's innings.

From 258-4 at the day's dawn, India were all out for 345, and New Zealand's daunting batting challenge began.

Well, maybe it wasn't so daunting.

With Young the (relative) aggressor and Latham the steady compiler, the Black Caps easily ticked off minor milestones on the path to an excellent position at stumps.

Young, in just his fourth test and second as opener, reached his second test 50 off 88 balls, his milestone coming just after the duo had reached tea at 72-0.

Both batsmen were effective behind the wicket with sweeps and dabs, scoring plenty of runs behind square, and Latham brought up his 50 just before stumps, off 157 balls.

Perhaps most impressively, they did it without too much luck, or trouble.

Latham was dismissed twice lbw – on zero and 10 - but his rapid reviews were the sign of a man with knowledge of a healthy edge, and no worries. He survived one more incorrect umpiring call before stumps, this time when he was given out caught behind, but knew he hadn't touched it. Latham three, umpires nil.

Young, meanwhile, had a few edges drop short of the slips cordon, which could be partially contributed to soft hands, but aside from ill-advised appeals, India were rarely granted opportunities to take significant ascendancy.

They still could, mind. Safety, or even Black Caps control, is a world away – in the first test in Kanpur in 2016, New Zealand bowled India out for 318, and were at 159-1 in response before ultimately losing by 197 runs.

Even though the pitch doesn't seem as volatile as predicted, there are still plenty of balls shooting through low, and enough turn to indicate that batting fourth will be an unpleasant experience.

As a result, victory will require a hefty first-innings total, and then for Southee, Jamieson and the spinners to put in a similar effort when handed back the ball.

But thanks to three standout individuals, the Black Caps can dare to dream.