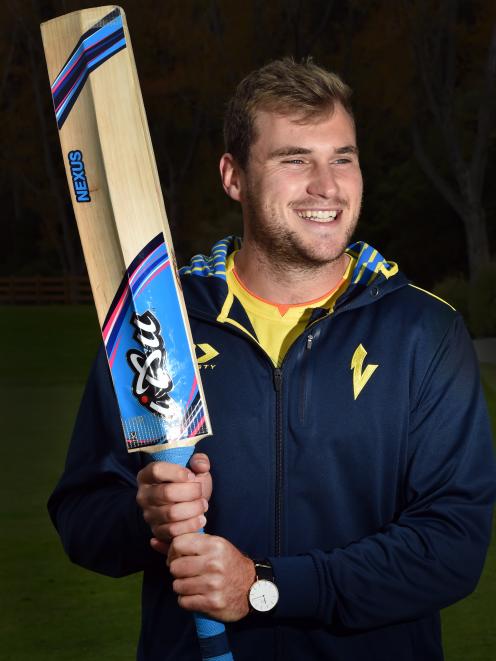 New Otago signing Dean Foxcroft: ‘‘It was not an easy decision [to leave Central Districts]. But for me it was the quickest way to hopefully play for New Zealand and that is my main goal.’’ PHOTO: PETER MCINTOSH
The last player to arrive in Dunedin from Pretoria turned out to be rather handy. New Otago recruit Dean Foxcroft tells cricket writer Adrian Seconi he hopes to catch some of the success Neil Wagner enjoyed.

Central Districts will be feeling the pain as well.

Dean Foxcroft has slipped through both nets and popped up in Dunedin.

If he is half as good as his rookie season suggests he could be, Foxcroft could be quite the catch for the Volts.

The 21-year-old South African-born all-rounder has an adventurous spirit and that is what brought him to New Zealand.

He wanted to spend the summer here and experience the culture. Once he had a taste he decided he wanted to extend his stay.

The hard-hitting right-hander was familiar with Otago coach Rob Walter from when Walter coached the Titans. That connection proved very useful.

Walter was able to offer Foxcroft the opportunity to play more first-class cricket than he would get with the star-studded Central Districts line-up.

"Central Districts is an awesome place and an awesome team. I loved every minute there," Foxcroft said.

"But they have a really, really strong squad and finding game time there was going to be difficult because there were a lot of guys in front of me.

"So for me it is about helping the Volts win games, scoring runs and taking wickets."

He is a more-than-handy right-arm spinner but his greatest value will be with the bat. Otago's top order struggled at first-class level last summer.

He has played only three first-class games and is yet to make an impact with the bat in that format. But he has grabbed 12 wickets and he was dynamite with the bat during the one-day tournament.

He scored 259 runs at an average of 51.80 in six games, including an undefeated 120 against Northern Districts.

But perhaps the real indication of his class came during the twenty20 final.

He came in with his side nine for one and top-scored with 63 from 50 deliveries. It was against a quality Northern Districts which included Black Caps Tim Southee, Scott Kuggeleijn, Mitchell Santner, Ish Sodhi and import Kyle Abbott.

It was a thoughtful and well-paced innings which help set up a convincing win.

That success with the Stags made it even more difficult to leave Napier.

"It was not an easy decision. But for me it was the quickest way to hopefully play for New Zealand and that is my main goal."

Knowing fellow South African Neil Wagner had made his way out to Dunedin and had gone on to forge an impressive domestic and international career certainly helped Foxcroft reach his decision.

He hopes to catch some of that success and has begun the qualification process.

But first there is just a little matter of scoring runs and taking wickets. He has been named in the Otago team for its opening match of the season against Wellington at the Basin Reserve on Monday.

Otago finished last in the Plunket Shield last summer and it has been 31 years since the province won the tournament.

The Volts have a squad better suited to the shorter formats but improving their four-day cricket is a big focus for the side.

The bowlers might have the bigger challenge this season. The stocks have thinned and the Volts can ill-afford injuries.

Jacob Duffy will spearhead an attack which includes Matt Bacon and Michael Rae.

Former international spinner Mark Craig missed most of the season through injury and will be hoping he can rediscover his form.

Opener Hamish Rutherford top-scored for Otago last season and is always a key wicket for the opposition.