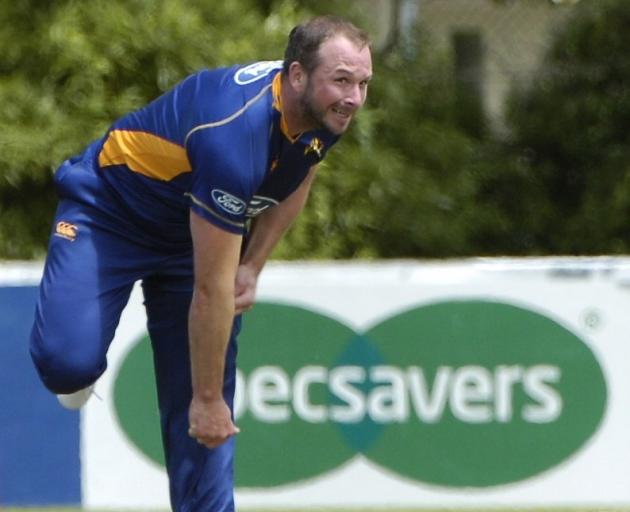 Darren Stevens bowls for Otago against Auckland in a 50-over match at Oamaru’s Centennial Park in 2011.PHOTO: ODT ARCHIVES
Veteran Kent all-rounder Darren Stevens has been named as one of the five Wisden cricketers of the year.

Why do we care? Well, because it is remarkable story of longevity, and he had a memorable stint in Otago in 2010-11.

Memorable for mostly the wrong reasons, but first a look at his impressive career.

The 44-year-old — that’s right, he’s closing in on a half-century and still playing —is a popular figure in Kent.

His award will have been received warmly among the faithful who have had tremendous value out of the the right-hander/right-armer since he transferred from Leicestershire in 2005.

He has scored 31 hundreds and claimed 29 five-wicket bags for the county.

And he was a standout last season. In the little cricket which was played in a Covid-19-affected summer, Stevens was in hot form with the ball.

He nabbed 29 wickets at an average of 15.58 in five first-class games, including three more five-wicket hauls.

Incredibly, all 29 of his career five-wicket hauls have come since his 35th birthday.

Some of us have not even run around the block since passing that bracket year.

Stevens, who made his first-class debut in 1997, became the the oldest player to receive the accolade since 1933. He is a modern WG Grace.

But Stevens’ stint with Otago 10 years ago was not particularly impressive.

He got dubbed the narcoleptic trundler after he took a nap before going out to bat in a one-day preliminary final.

Stevens might have got away with it had he not chose a sunny spot right next to the Otago Daily Times cricket writer — me — or scored more runs.

But he was run out for 22 — probably still a little tired.

He was one of two English imports who came over that season. Chris Nash was the other.

Together they had about the same impact as a small child has on a plate of brussels sprouts.

Obviously, we never saw the best of him.