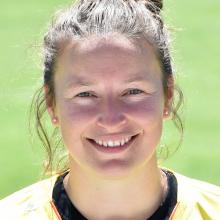 She is one of 11 White Ferns who will be involved in the competition.

While Jensen has joined the Hurricanes, four White Ferns have joined teams as training partners.

Auckland Hearts’ Katie Perkins (Adelaide Strikers), Lauren Down (Melbourne Renegades) and Holly Huddleston (Brisbane Heat), along with Central Hinds’ Rosemary Mair (Perth Scorchers), will train alongside their allocated team but are available to be selected for any side if a marquee player (Cricket Australia-contracted or overseas) becomes injured or unavailable.

The opportunity presented itself as the White Ferns players were in Australia and had been operating in a biosecure environment.

They would therefore not need to go through a further quarantine period before entering the Women’s Big Bash league hub in Sydney.

NZC viewed it as a good opportunity for the players to be in new training environments, alongside other quality players, where they will develop their game.

The league starts this Sunday with a full round of matches. All games will be played within the Sydney hub.