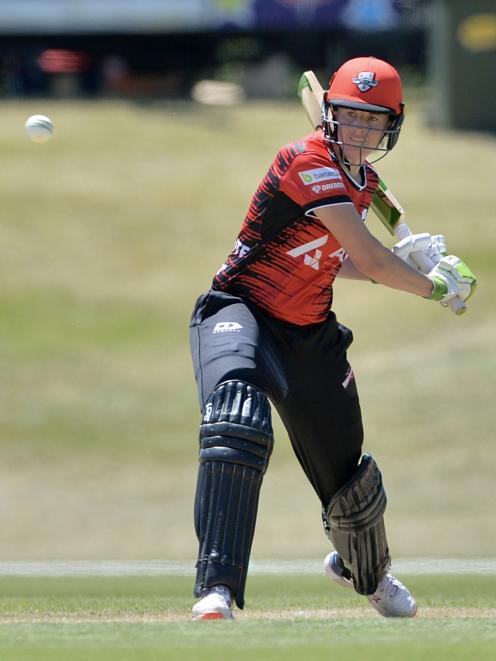 Amy Satterthwaite lines up a shot during Canterbury’s game against Otago at Molyneux Park on Tuesday afternoon. PHOTO: GREGOR RICHARDSON
Not enough runs. Not even close.

The Otago Sparks suffered a heavy loss to Canterbury in a twenty20 match at Molyneux Park yesterday.

The home side stumbled its way to 112 on another day when most of the top order crumbled meekly.

That proved 30 or 40 shy of a more competitive tally.

Elegant Canterbury left-hander Amy Satterthwaite
blasted an unbeaten 56 to help her side post an eight-wicket win midway through the 16th over.

consecutive loss in the tournament on a poor start with the bat.

"You’re under pressure when you lose three wickets [early]", he said.

"I thought we were just starting to get even before Hayley [Jensen] got out lbw. I thought we had been able to shift the momentum and we were starting to put pressure back on them."

The Sparks’ lack of batting depth was always going to be a challenge this season and it was exposed early.

Opener Millie Cowan had her leg stump knocked out of the ground before she could really get going.

Lea Tahuhu got the wicket but Cowan’s lack of footwork was the real culprit.

Tahuhu struck again quickly and it was the key wicket. Veteran right-hander Katey Martin played a cut shot on the up but picked out Natalie Cox at point.

Polly Inglis sliced a couple of boundaries through the slip cordon in a streaky start to her innings.

She never looked very comfortable against the pace of Tahuhu either, but was out stumped for 21 off the bowling of Kristy Havill.

The Sparks had slumped to 34 for three midway through the seventh over.

A lot rested on the partnership between Jensen and Caitlin Blakely.

Jensen got herself set but on 14 she was trapped lbw by Frankie Mackay.

Blakely (18) followed shortly after. She spooned a catch into the leg side with a lap shot.

Mackay had a second but there were no seconds for the Sparks. They were done.

The middle order squeezed out another 30-odd runs.

Bella James contributed the bulk of those with 24.

Canterbury’s Gabby Sullivan nabbed three for 19 but Tahuhu was more potent and was rewarded with three for 11.

Otago’s Molly Loe struck a major blow at the beginning of the chase.

She trapped Mackay lbw for a golden duck.

But Satterthwaite moved into her work after an initial period of assessing the pitch.

The experienced international quickly made up for her first half a dozen balls with a hitting spree.

She was striking the ball beautifully and a series of deliveries disappeared to the boundary in rapid time.

She teamed up with Cox to plunder 15 off Jensen’s opening over.

Spinner Eden Carson got driven down the ground for a brace of boundaries.

Cox holed out for 29, ending a damaging partnership of 74. But Satterthwaite kept the downward pressure on the throttle.

She pushed a single into the off side to raise her half century off 35 balls.

Kate Ebrahim ended the contest with a drive through the covers.