By Adrian Seconi
0 Comments
It takes a mighty effort to remove the likes of the incomparable Bert Sutcliffe from a page in the almanack.

But that is exactly what Nathan Smith and Michael Rippon managed on Saturday. 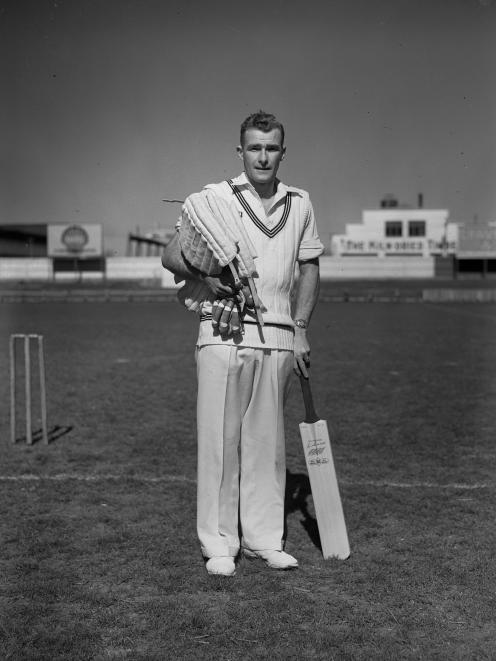 Bert Sutcliffe at Carisbrook, date unknown.PHOTO: THE EVENING STAR/ALLIED PRESS FILES
The pair combined to set an Otago first-class seventh-wicket record for the province with a stand of 190 at the University of Otago Oval.

They eclipsed the previous mark of 182, posted by Sutcliffe and Alan Gilbertson, at Lancaster Park in December 1952.

Records come and go but this one had stood for 67 years. And what made it so special was that was the innings in which Sutcliffe went on to score 385.

It is still the highest first-class innings in New Zealand and part of the game's folklore.

Smith had double the reason to celebrate. He brought up his maiden first-class hundred during the mammoth partnership.

"It was a pretty special moment ... because family were down as well, so it was nice to celebrate it with them," Smith said.

"I was [extremely nervous]. I'd never been there before, so it was about calming myself down for a good period of time and just trying to watch the ball, really.

"I tried to keep it nice and boring and play nice and straight."

The 21-year-old right-hander reached the milestone with a lovely on-drive back past the bowler for four. He was eventually undone on 114 while playing aggressively in search of an extra batting bonus point for his side.

Rippon's knock of 74 not out was a career-best as well. Poor weather has probably robbed him of the opportunity to push for a maiden hundred, though.

"It is pretty cool to break a record but it is also nice to put ourselves into a good position for the rest of the game," Rippon said.

Northern Districts had reduced the home side to 107 for six when the pair came together.

Black Caps left-armer Neil Wagner had bowled some tremendous spells and the Volts were badly in need a decent partnership.

"We were not looking good. But I guess it was about breaking it down and achieving small goals over by over and ball by ball," Rippon said.

"The more time you spent in the middle, the easier it got."

"The ball was reversing and Neil Wagner was coming in hard and he bowled a really good spell," he said.

"Joe Walker was getting some nice turn and it wasn't easy."

Volts coach Rob Walter said for the pair to "keep going and going and put together 190 was a hell of an effort".

"I've been very vocal in my thoughts about him [Smith] as a batter. I think technically he is as strong as anyone in the team, so to have him walking out at No7 adds real strength and depth to your batting line-up.

"And it is awesome to see a young guy get a first-class hundred early in his career and in tough conditions and in conditions that tested his technique," Walter said.

"I want to allow him to progress and gain experience at the rate that he is meant to.

"If he continues to do things like he did [on Saturday] then the journey will take care of itself."