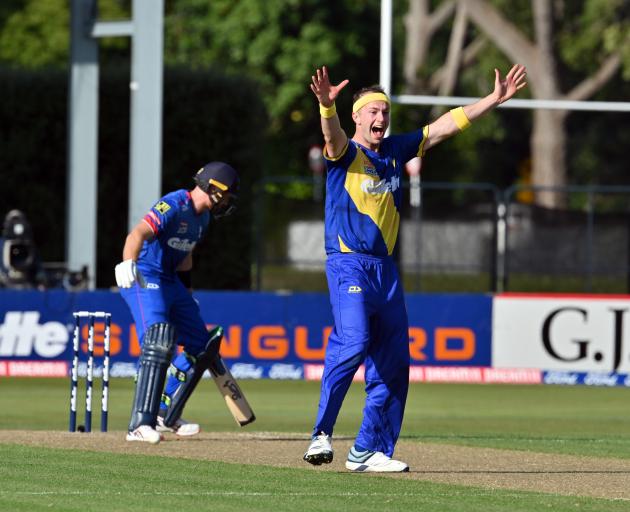 Volts bowler Michael Rae claims the wicket of Martin Guptill during his outstanding spell of three for 23. PHOTOS: LINDA ROBERTSON
That was a country lane with more than its share of hidden bends.

Otago was winning one minute and Auckland the next.

You can only hold your breath so long. And when the 1200 or so fans finally exhaled, Auckland pounced.

Ronnie Hira helped club 20 from the penultimate over of the game to set up a tense three-wicket win in the elimination final yesterday evening.

The Aces will now play Wellington in the final at the Basin Reserve tomorrow. If that game is anywhere near as dramatic as the pulsating game at the University of Otago Oval, it will be a cracker.

The Volts gave themselves a decent chance to progress. They fought their way through to 174 for eight.

When Michael Rae ripped out three quick wickets, it appeared that tally was going to be enough.

Enter Hira and Robbie O’Donnell. They combined to steal the victory away right at the death.

Perhaps Otago could have bowled better at the end, but it would be churlish to be too critical.

It was a tremendous game of cricket with many ebbs and flows.

Volts batsman Anaru Kitchen is bowled by Mark Chapman for 21. The Aces wicketkeeper is Ben Horne.
The new bat was no good either. Rutherford mistimed a lofted drive and was caught at mid-wicket for four.

Otago was amassing dot balls, and found itself trying to get out of overs with a big shot.

It worked briefly. Nick Kelly hooked a shot for six and Neil Broom clouted another over mid wicket.

But he clothed the next and Martin Guptill sprinted forward and scooped up an athletic grab.

Kelly and Dean Foxcroft (31) have been in fine touch this season, and shored up the platform with a steady partnership.

Midway through the innings Otago was reasonably placed at 78 for two.

Kelly brought up his fourth 50 of the campaign with a glorious drive through cover for a boundary.

But the left-hander could not push on as he would have hoped. He cracked a lofted drive to Hira at long off on 60.

The fielder was back in the action moments later when Josh Finnie lobbed the ball in his direction.

Will Somerville had his third wicket and the Volts’ innings was rapidly falling apart.

Right about when the ball should have been sailing over the rope, a steady stream of batsmen where trudging back over it instead — four of them in the space of 10 balls.

But twenty20 games can turn on a 10c piece and that is exactly what happened.

Nathan Smith clubbed 18 off the last over to give Otago useful target to defend.

He took that momentum into the next innings, removing the dangerous Colin Munro with a skilful caught and bowled.

Smith nearly had Guptill caught behind moments later, but the ball did not carry.

That was a nervous moment, but Guptill was quickly back in control. He oozed class, sweeping Foxcroft for back-to-back fours.

He was carefully selecting the deliveries to attack, and then boom — Rae trapped him lbw for 43.

A good over became a great over when Glenn Phillips chopped on for 27.

Rae took all that boundless energy into his next two overs, and got the birthday boy Craig Cachopa out for seven.

But Hira and O’ Donnell had other ideas.