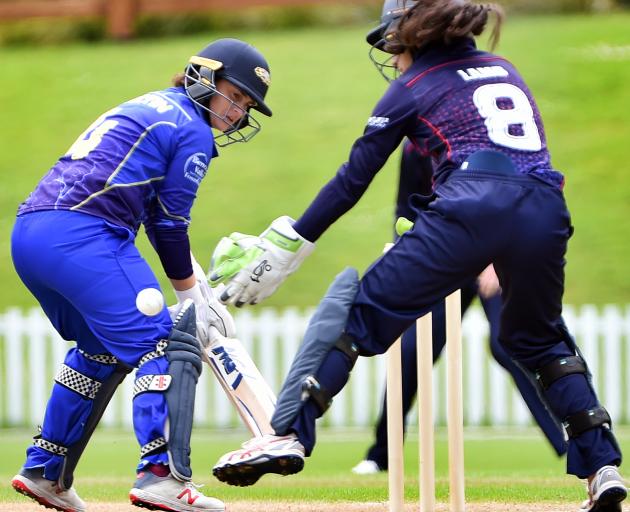 The Auckland Hearts were convincing winners on both days and with it kept up with the Central Hinds. They look like the two favoured sides in the competition.

Otago batted first in both games  in Dunedin and did not make much of an impact with the willow.

On Saturday, its opening pair of Polly Inglis and Olivia Gain started well and put on a half-century stand which should have set the home side up to make a decent total.

Rain in the morning had reduced the contest to 34 overs each.

But Inglis went first and was them quickly followed by captain Katey Martin. She was out for a first-ball duck, not a great way to play her 155th game for Otago — the most one-day games for a province of any cricketer in New Zealand.

The home side never really recovered from the loss of Martin and the Auckland attack pinned the Sparks down.  In the end, Otago limped through to 137 for seven wickets off its 34 overs, which was always going to be difficult  to defend.

Auckland got into its work quickly and and although it lost Anna Peterson to the second ball of the innings,  it got to the target in the 23rd over. Skipper Maddy Green and Katie Perkins  knocked up 51 apiece to give the Auckland side the win.

Yesterday, the start was again delayed by weather but the game was  reduced by  only five overs each.

Auckland decided to have a bowl in the overcast conditions and  reaped the rewards. Otago lost its first four wickets with just 25 runs on the board and from there  it was a case of trying to get as many runs as possible.

The side failed to get enough bat on ball and was eventually dismissed for just 107 in the 39th over.

Leigh Kasperek was the best for Otago with 34 but she was the only player in the Otago line-up to get more than 20.

The wickets were shared around for Auckland  as all its six bowlers bagged  a wicket.

Auckland did not have to rush to reach the small target but sensing an early finish was what the side would want, it did not muck around.

Green and Perkins came together when the score was 29 and combined to steer the visiting side to victory.

Green eventually got a half century as Auckland won by eight wickets in the 19th over. Otago  will now switch to twenty20 mode, taking on Canterbury at the same venue in two weeks.

• King’s High School lost its final game at the Gillette Cup in Christchurch. It was dismissed for 172 and Palmerston North Boys High School successfully chased the target, winning in the 40th over by six wickets.